What is the national bird of Algeria 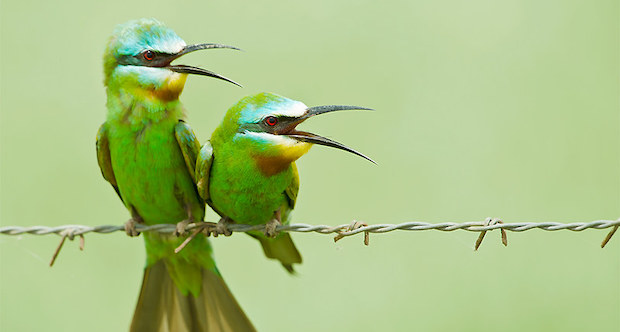 The blue-cheeked pint inspires with its plumage, which shimmers in the most beautiful green and blue tones.

The blue-cheeked pint belongs to the order of the rock-winged birds and to the bee-eater family. It is around 30 centimeters long and weighs almost 50 grams - a real lightweight.

The plumage has various shades of green, with the belly being lighter than the back. The beak is long, pointed and dark in color. A wide black blindfold extends from the base to the back of the head. The throat is orange to rusty red. There is a more or less strong blue color on the cheeks, sometimes just a light turquoise or very light green. The middle tail feathers are particularly noticeable on the dark tail. They have very elongated shafts and protrude well beyond the rest of the tail.

Our bird of the week is widespread in Morocco and Algeria, Turkey, northern Kazakhstan and India. There it breeds in subtropical semi-deserts, on river banks with lots of sand and gravel or in bushy grassland. He always makes sure to stay near water. As a long-distance migrant, he spends the winter in East and South Africa.

Behavior and worth knowing

Blue-cheeked spiders are very sociable birds and usually fly around in flocks. During the day they like to sit shoulder to shoulder on branches or wires. In the evening they retreat to large trees together to spend the night there.

The diet includes hymenoptera such as bees, wasps, bumblebees and hornets, but also cicadas, termites, dragonflies, grasshoppers and various beetles. The blue-cheeked spint hunts from a seat guard and only undertakes short hunting flights. He can very precisely distinguish which insects are poisonous and which are not. For example, it does not eat bees and wasps straight away, but rubs their abdomen against a solid surface to squeeze out the poison. He even recognizes hoverflies, which are very similar to wasps, as harmless and dispenses with the “detoxification process”.

Blue-cheeked spiders are colony breeders. Mating and breeding take place from April to June. The birds breed in caves they have dug themselves, which they reach via a tube about one meter long. Most of the caves are on steep slopes and ledges, but sometimes also in flat ground. During the brood, males and females take turns. Once the young have hatched, the parents no longer have a quiet minute, but have to catch a lot of insects to feed the little ones.