How earthquakes cause fires

Volcanoes and Earthquakes: The Pacific Ring of Fire

How big is the Pacific Ring of Fire?

From there, the ring encompasses the entire Pacific Plate, the Juan de Fuca Plate (located off the coast of Canada and the US states of Washington and Oregon), the Cocos Plate (located in the Pacific off Central America) and the Nazca Plate ( off South America). Seismic activity is high along the entire area.

How endangered are people there?

Around 90 percent of all earthquakes in the world strike within this ring of fire. This also means that people in Indonesia, the Philippines, Malaysia, Japan, Australia or on the island states of Melanesia, Micronesia and Polynesia have to live with permanent threats. The people along the entire North and South American Pacific coast are also affected.

But: The dangers are not the same for everyone: At higher altitudes or near plate boundaries, the risk of earthquakes is high. The personal threat situation here depends heavily on the architecture and disaster risk management. There is also the danger of a tsunami along the coast. Giant waves triggered by earthquakes or volcanic activity can wash over entire areas in a very short time. Nearby volcanoes threaten settlements through eruptions - through gases, dust, lava and landslides 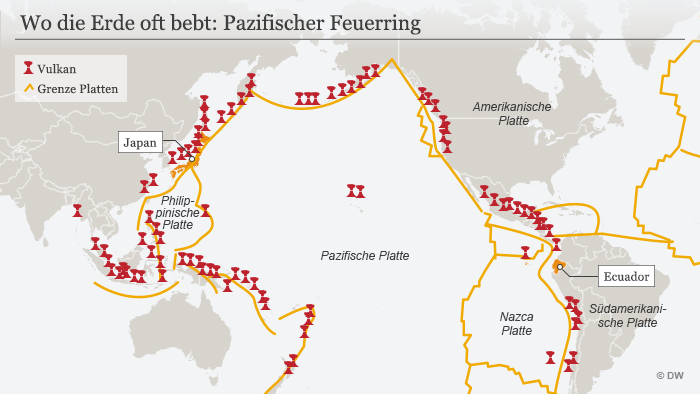 Why are there so many volcanoes along the ring of fire?

The tectonic plates that form the earth's mantle move continuously over layers of partly solid, partly molten rock. Wherever plates collide or are torn apart, the earth literally moves.

Some volcanoes can form where the earth is torn apart - for example in Hawaii in the middle of the Pacific plate. Most volcanoes, however, are located where the plates meet. Mountains like the Andes in South America or the Rocky Mountains in North America were created in this way.

This is the name of one of the collision processes that is typical of the Pacific Ring of Fire. Here, one tectonic plate is pushed under another. The immense pressure exerted by the plate, which has moved downwards, on the magma in the interior of the earth, means that it looks for a way upwards at the plate boundary. This is how volcanoes are formed.

However, if the ocean lies above it, volcanic islands can also form. The Mariana Islands - a group of islands on the border of the Philippine and Pacific plates - were created in this way. When and where did the worst earthquakes occur along the ring of fire?

The worst known earthquake struck Chile on May 22, 1960. It had a strength of 9.5 on the Richter scale, which is open to the top. It is the record holder on the United States' "list of the worst earthquakes since 1900". Geological Survey.

It is followed by an earthquake in Alaska with a magnitude of 9.2 in 1962, the seaquake of North Sumatra, which struck on December 26, 2004 with a magnitude of 9.1 and triggered a devastating tsunami in the Indian Ocean, and the seaquake off the Japanese coast near Honshu on March 11, 2011, which also led to a huge tsunami and thus to the nuclear disaster in Fukushima.

The earthquakes on this list are all greater than 8.5 magnitude, and most of them are in the Pacific Ring of Fire. Tectonic plates and the great earthquakes in the world

Why is it so difficult to predict earthquakes?

Despite intensive scientific observations of plate movements and volcanic activity, earthquakes cannot be accurately predicted. Even if two earthquakes happen in close succession, it is not always safe to determine whether they have something to do with each other. One earthquake doesn't necessarily have to trigger another.

Some seismologists are debating whether human activities in the earth's crust - such as mining, oil and gas production, or underground nuclear tests - can trigger earthquakes. However, it is difficult to produce hard scientific evidence for this.

One thing is clear: the Pacific Ring of Fire is under constant pressure. If an earthquake happens somewhere, the pressure will be released locally for some time. But shortly afterwards, the pressure builds up again.

So people who live there can only do what makes life with danger possible: build earthquake-proof as far as possible, avoid the immediate coastal areas and maintain early warning systems in order to be able to escape from a tsunami. And they have to keep supplies, water and food ready in safe places so that life can go on after the next disaster.

This article was last updated on February 15, 2021