Stupid mommy, how parents react correctly when a toddler hits

When a toddler hits, it doesn't just hurt the parents physically. Many feel powerless over their child, are ashamed or believe that they have failed in their educational work. Parents are rarely to blame for this. What experts advise when dealing with aggressive toddlers. 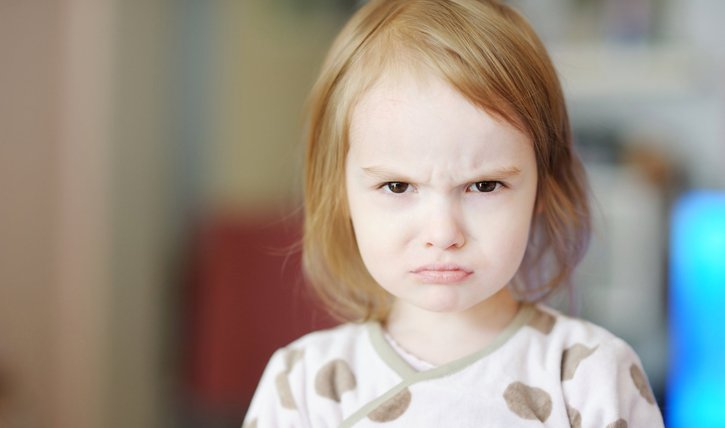 "But nothing, march off!"

Some children will accept this parental rejection of the longed-for sweets, some may throw themselves on the floor, but others may also say:

How parents react now is very important as further tantrums can take place.

Americans refer to them as “terrible twos” or terrible times Defiance phasewhich starts around their children's second birthday. This time shouldn't be scary. Because we actually experience how the child takes a very important developmental step. At around one and a half to two years old, toddlers learn that they have a will of their own and that they can influence their environment. And because children are curious because of that, they naturally want to try out this new skill.

Sometimes there are also tantrums. Especially when toddlers cannot get their parents or educators through what they imagine.

Why a toddler hits

"All of this is initially a necessary and very positive development that parents should encourage." says the Zurich educational advisor and social worker Birgit Sauremann.

At the same time, the defiant phase is the time in which the little ones experience a growing desire for self-determination, but at the same time do not speak so well that they can express their inner conflicts to adults. What is available to them are then almost exclusively non-verbal forms of expression: howling, stamping, throwing on the floor. And if they encounter troubled emotions, subjectively perceived injustice, despair, sadness or helplessness, it can also happen that a toddler hits every now and then.

But not only the inability to verbally express his emotions, but also the natural testing of power limits can lead to a child distributing small “test blows” to his environment. Trying out what power you have, whether the environment is impressed when you hit and what methods you use to make your parents heard is a perfectly normal step in development. Depending on the temperament and character of the child, this test phase is different, and often aggressive.

Hitting is sometimes allowed: children have to test

So if a toddler hits it doesn't have to mean something abnormal. Even the opposite can be the case: children not only have the urge to let off steam physically, to fight and sometimes to wrestle, but also have to get to know their own limits. Playful fighting can be a learning process in social interaction. In play, children should therefore be allowed to fight. However, absolutely in compliance with certain rules.

If you observe a playful scuffle between children, the children should therefore grab one another and briefly discuss whether it is a game and lay down rules that must not be exceeded in the "scuffle game". Of course, appropriate sanctions (e.g. complete abandonment of the game, renouncing sweets or the like) are agreed, which are mandatory in the event of an infraction.

Keep Calm! What experts recommend when a toddler hits

Very important: keep calm and stay calm. At this moment, parents should make it clear that they are the “big ones” who have every situation under control. In any case, this is how your children want to see their parents. Parents who stay calm and know how to regulate the situation give the child a feeling of protection and reliability. Only when children have this trust in their parents do they accept parental upbringing even in a moment of aggression.

What helps now are time outs and clear announcements. Small children may not yet be able to understand every one of our words. They are simply not accessible to arguments of pure reason. They know how to interpret our actions and reactions all the better.

So if a toddler hits, try to react wisely. Does the child want to provoke or test how far it can go? Then parents are best not impressed. Parents grab the child, preferably by the arm who hit him, put him in a quiet corner, say clearly, but without being overly emotionally upset, that hitting is an absolute taboo. This taboo should be conveyed with such force that it will be accepted without exception.

Even if the toddler does not hit out of defiance or arrogance, but out of pure despair, anger or helplessness, it is important to act calmly, prudently and decisively. As it happens, it must be clear that fistfights are never an option. However, once this message has been received, parents should promptly address the child's needs. Perhaps it needs consolation because it is ashamed of itself for its act? Or he seeks the support of his parents, who can show him what options there are to calm down in stressful situations. In any case, it needs love now. And of these - as the old saying goes - people (whether big or small) always need the most when they least deserve it. So, cuddle up with your little darling and look for the cause. Then the little boy will soon no longer have to hit. And all the more time to laugh, run around and cuddle.

Of course, you should not give in to your child in this situation. Regardless of whether a child stomps, cries, bites or hits to get their way, if they get the ice cream now, the child will learn that it is successful with it and that it is an accepted method.

Did the parents fail?

When the toddler hits, it affects many parents not only physically, but above all emotionally. Especially when the aggression is directed against the parents themselves, parents make great reproaches. In situations like this, however, always make it clear to yourself that a child is not an adult. It only acts with the means that are available to it. Often times it is just a normal developmental process that a toddler strikes. Therefore, parents did not fail in advance, but rather are asked now. The child needs his parents now more than ever. Aggression is also stressful for the child himself; the toddler needs parents who help him cope with the situation, give him orientation and love.

It often helps to change your perspective. A child can understand, because a child can hardly rationally understand why it cannot have ice cream now. The Swiss psychologist Denise Tinguely therefore recommends making constructive announcements that give the child an orientation. Instead of a clear "No, there is no ice cream now!", The parents could say, "There is ice cream for dessert."

Anyone who exemplifies aggressiveness in this situation, for example, often reacts quick-tempered or even hits himself, can hardly expect any other behavior from the toddler. Children learn by copying. Of course, this does not only apply to the moment when the toddler hits, but especially in everyday life. Parents should set an example of a constructive culture of argument so that their children can learn something from them.

When does aggressive behavior become questionable?

The fact that children between the ages of around two to four years of age have outbursts of anger, are defiant and also hit or bite does not have to be a worrying developmental step - and, incidentally, also not a sign of parental failure. Only when the child wants to aggressively enforce their will for more than six months (for example with blows, kicks or insults) and parents and educators do not notice any improvement despite educational measures, perhaps even recognize a worsening, this behavior goes beyond the usual Measure out.

It is conspicuous and not age-typical that children behave aggressively even if they already have cognitive and linguistic capabilities to verbally resolve a conflict or an emotional stressful situation. For example, by asking, swapping or sharing. If children are now regularly, and not only in special exceptional situations, physical, parents should pay special attention. By then they have usually already internalized that hitting is a good way of asserting yourself.

The causes of aggressive behavior in children

When the child's aggression goes beyond the usual testing or clumsy overreacting to emotional stress in the so-called defiant phase, there is usually no simple explanation. The reasons for having a Toddler beats, can be varied. What all causes have in common, however, is a feeling of being overwhelmed, which there is no other way to help than with kicks, bites and hits.

For example, some children have a hotter temperament. They find it difficult to control their emotions. Children with poor self-confidence are also more prone to aggressive behavior.

Deep-seated sadness, anger or perceived injustice, for example, can burden the child so much that they overreact even in everyday situations that are independent of them. If the children are already able to articulate themselves well, parents should try to get to the bottom of the cause in a calm situation through a conversation and specific questions. Perhaps you already have a guess as to what is on the mind of the little one?

Children who are not given the freedom to think for themselves and behave independently and children who are spoiled too much can also tend to be rebellious. This is then your way of showing, I don't want to be bossed around all the time, I want to have experiences myself.

And there is of course that too: toddlers imitate their environment. It may be beaten in the family, by parents, siblings, or by other children in daycare, or has watched others beat and learned that beating is a legitimate way of getting through.

If there is a conflict that the toddler has in the family, it can also make sense to bring in a neutral person (perhaps the grandparents or a child psychologist) who will look for the cause with the child.

Thank you very much! You have successfully registered for our weekly newsletter. We have sent you a confirmation email.