Carbohydrates are important nutrients. In addition to fats, they are our most important energy suppliers. They are also often called sugar. On this page we clarify which different types of carbohydrates exist and how they are structured!

Carbohydrates have special properties, which are described in the following chapters.

Table of contents on this page:

Carbohydrates are so-called optically active substances that rotate linearly polarized light through a certain angle. What this means exactly is described below:

Light waves from a light source usually run in different directions of oscillation. If light is filtered through a polarizer, all light waves are filtered out, except those that are perpendicular. The remaining light waves run in the same (vertical) direction of oscillation. They are linearly polarized light. If this is now passed through a cuvette in which an optically active substance is dissolved in water, the direction of oscillation of the linearly polarized light is rotated by a certain angle. This angle, also known as the angle of rotation, can be measured using a second polarizer.

If there is a mixture of the same amount of left- and right-rotating substance, the plane of oscillation is not rotated, since the two directions of oscillation are balanced. Such a mixture is called a racemate.

If four different substituents are attached to an atom, it is a symmetrical atom. This symmetrical atom is called the center of chirality. These are marked with an asterisk on the asymmetric atom.

To determine whether it is a chiral center, it is not enough to look at the four atoms directly bound to an atom. In the following molecule, for example, two further carbon atoms are bonded to the middle carbon atom. It is still a center of chirality, as the atoms attached to these carbon atoms are different from each other. A -CH_3 group is bonded at the bottom, a -COOH group at the top. Four different groups are bound to the middle carbon atom and it is a center of chirality.

Molecules with at least one center of chirality are, as a rule, chiral and thus optically active.

Since the spatial arrangement of the substituents plays an important role in carbohydrates, it would be important to be able to use a spatial representation of the molecules. These are very confusing for large molecules. The Fischer projection was developed to show the carbohydrates more clearly.

In order to represent a molecule in the Fischer projection, the following rules must be observed:

The spatial arrangement of the substituents plays a major role in chiral molecules. If the connection of the atoms in two molecules at a center of chirality is different, then we are dealing with isomers.

Example: tartaric acid
If the spatial arrangement of the molecule is changed at all centers of chirality, i.e. if the substituents are swapped from right to left at all of them, the result is a mirror image, i.e. an enantiomer.

If the spatial arrangement is changed only at one of the two centers of chirality, diastereomers are formed. 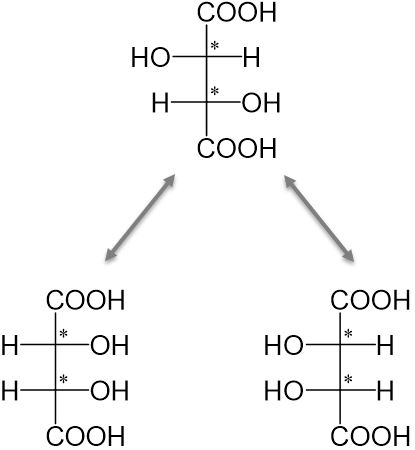 With carbohydrates, as with tartaric acid, there are always two isomers that behave like an image and a mirror image (enantiomers). These enantiomers are distinguished by a prefixed D- or L- in their names. The name is derived from the position of the lower hydroxyl group in the Fischer projection - if the lower hydroxyl group is on the right, it is the D-shape, if it is on the left, it is the L-shape. As an example, consider the two enantiomers of tartaric acid:

Since this nomenclature only indicates the position of the lower hydroxyl group, diastereomers must be given by different names (only enantiomers can have the same name with the addition of D or L).

ATTENTION: The D- / L-nomenclature has nothing to do with the angle of rotation! 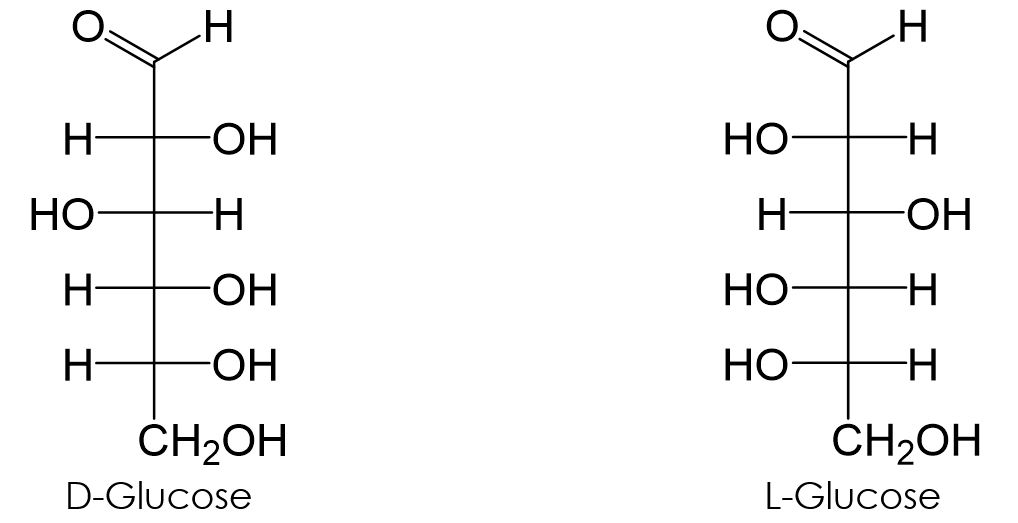 Since glucose is an aldehyde, it can be detected with the help of the silver mirror test or the Fehling test.

As a rule, glucose is not in the open-chain form shown above, but in a ring form (pyranose structure), which is formed by a nucleophilic addition between the hydroxyl group on the C5 atom and the carbonyl group on the C1 atom. The resulting six-membered ring is very stable and is called glucopyranose. 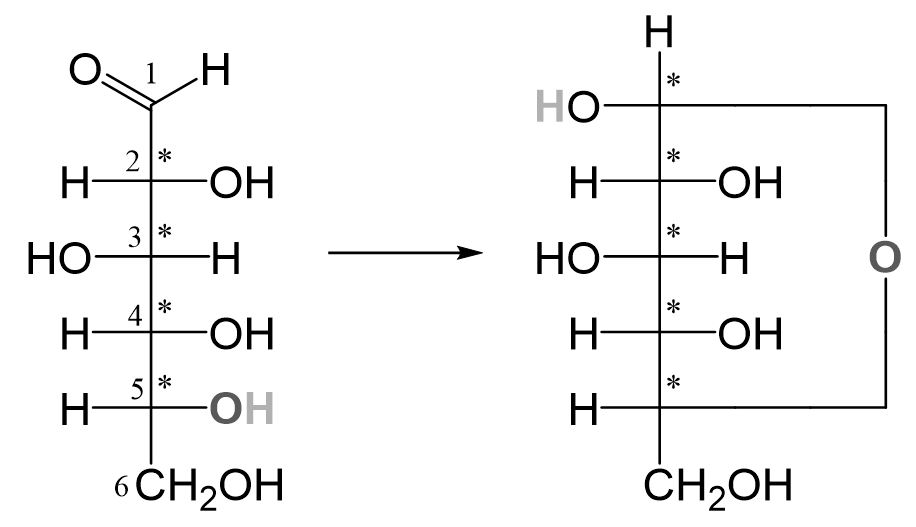 The ring closure creates a new center of chirality at the C1 atom.

If carbohydrates are present in the closed ring form, the Fischer projection is no longer a suitable form of representation, since the new bonds here are much longer than the others, although in reality they are of the same length. Therefore, a different form of representation is required for the ring shape of the carbohydrates: the Haworth projection. In order to rewrite a carbohydrate molecule from the Fischer projection to the Haworth projection, the following rules must be observed:

The ring closure creates a new center of chirality at the C1 atom. It is therefore important here whether the hydroxyl group is on top or bottom. Both shapes can be formed by the ring closure.

The forms “open-chain”, “α-form” and “β-form” can be present in aqueous solution. By closing the open-chain form into one of the two rings and separating the ring again, they are repeatedly converted into one another. These reactions are equilibrium reactions in which an equilibrium is established. The process by which the two anomers are converted into one another is called mutarotation.

Fructose is another important monosaccharide. The molecular formula of fructose and glucose (C_6 H_12 O_6) are identical, the two constitutional isomers have little in common. Fructose is not an aldehyde like glucose, but a ketone. 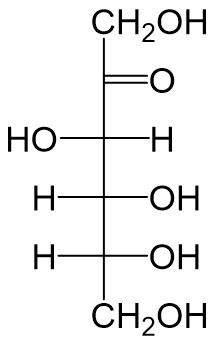 Like glucose, fructose is usually ring-shaped. There are two options for ring closure with fructose:

Although fructose is not an aldehyde but a ketone, the silver mirror test and the Fehling test are positive. But how can that be?
An aldehyde group must be present in a molecule for positive silver mirror and Fehling samples. This means that the keto group of fructose has to be converted into an aldehyde group. This conversion is called keto-enol tautomerism and it proceeds as follows: 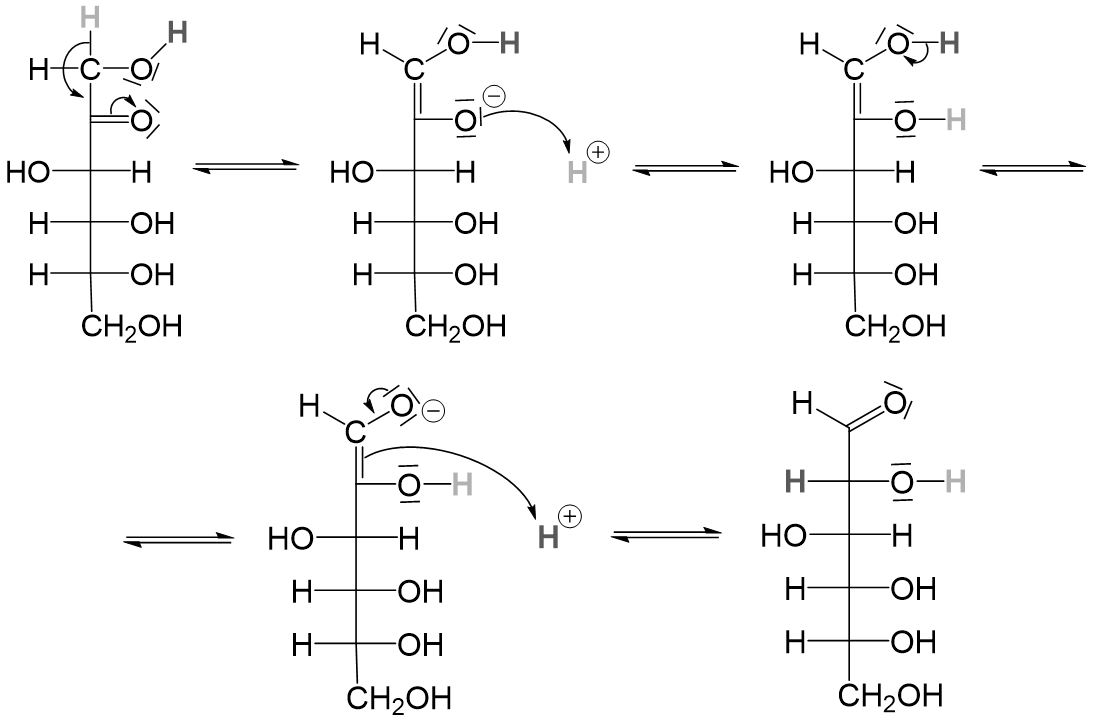 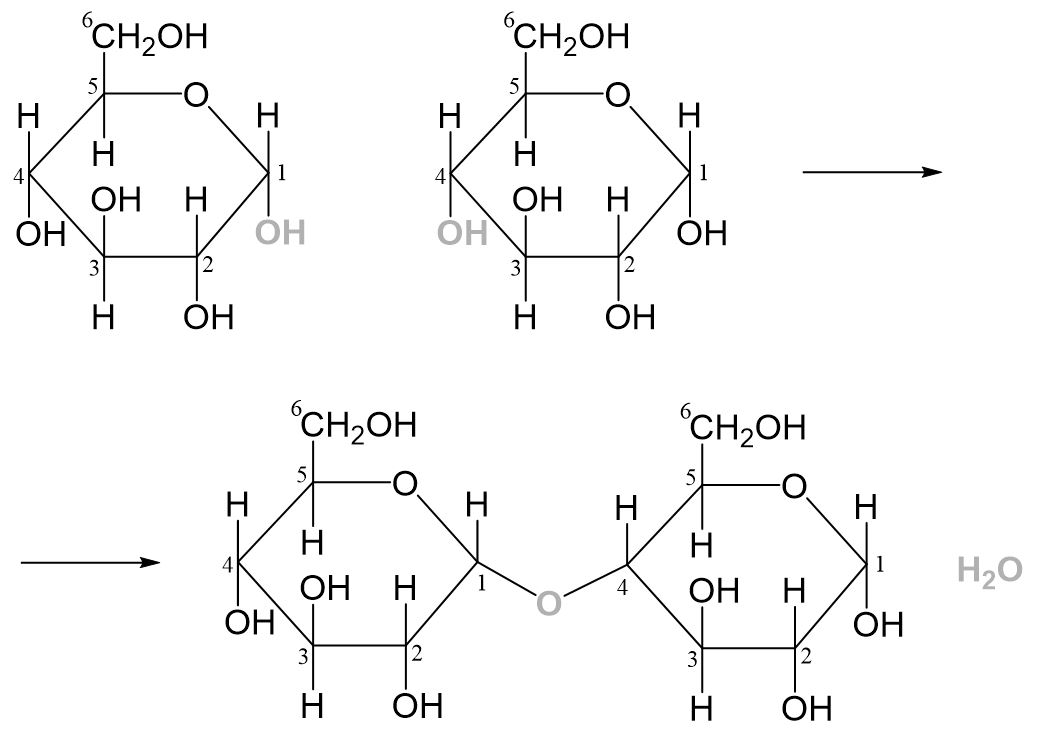 So that the two hydroxyl groups can react with one another, both must be oriented either upwards or downwards. In this case, one up and one down. Since the spatial arrangement cannot simply be changed, we have to turn the entire molecule around (mirror it at the drawn mirror plane).

As soon as one of the two molecules has been rotated, the two hydroxyl groups are both up and they can react with one another. 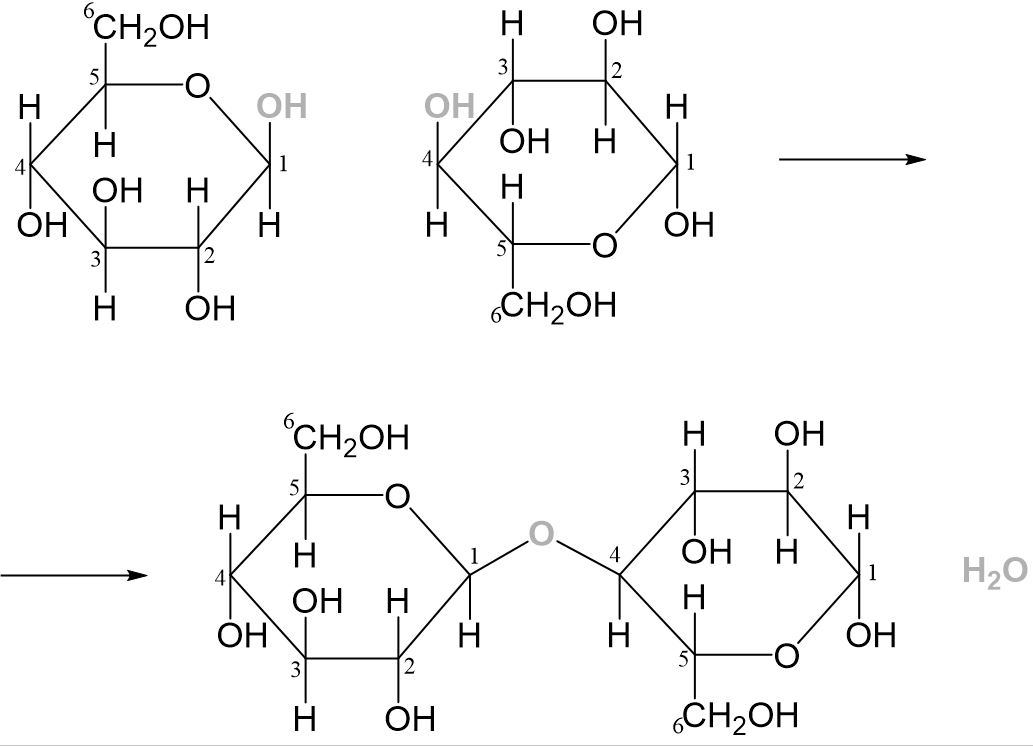 Now the two hydroxyl groups are next to each other and can react with one another. 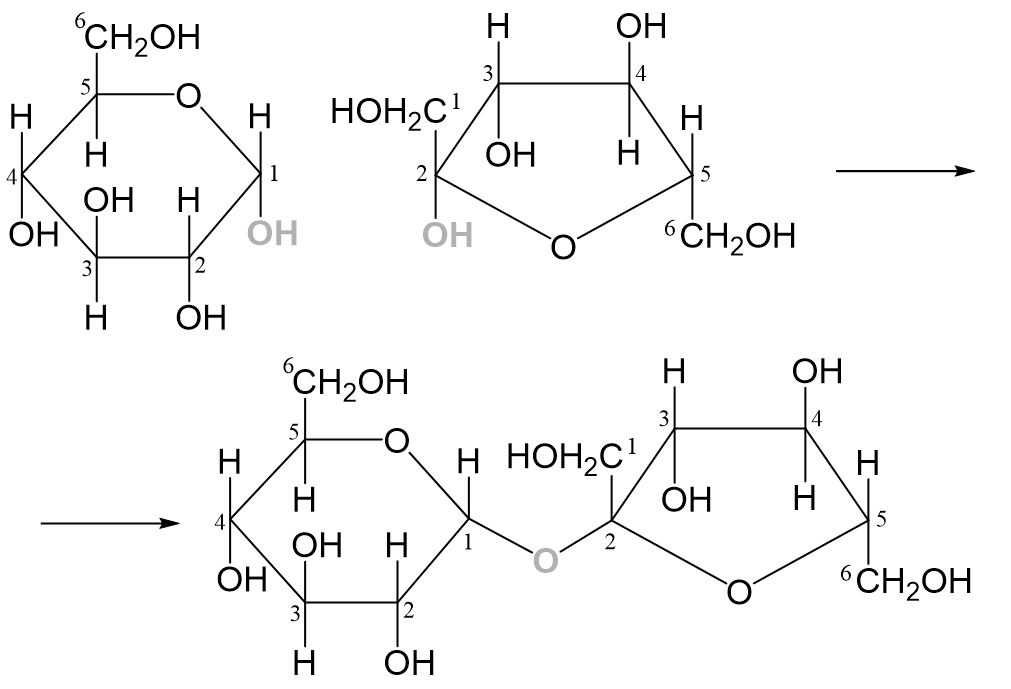 Disaccharides, in which the hydroxide group on the anomeric carbon atom of one of the two monosaccharides is not involved in the formation of the glycosidic formation, run in a positive silver mirror test or Fehling test. A monosaccharide whose hydroxyl group is retained on the anomeric carbon atom can change from the ring form to the open-chain form by mutarotation. In the open-chain form, the aldehyde group is present, which shows a positive silver mirror or Fehling test. Maltose and cellobiose are among these disaccharides.

Disaccharides, in which the glycosidic bond is formed by the reaction between the hydroxyl groups on the two anomeric carbon atoms, cannot be converted into the open-chain form, which is why the molecule never has a free aldehyde group. Therefore, the silver mirror test and the Fehling test with such disaccharides are negative. Sucrose is one of these disaccharides.

Polysaccharides are carbohydrates that are composed of at least ten monosaccharides via glycosidic bonds.
An important polysaccharide is starch.It is an important vegetable storage substance and consists of two components: amylose and amylopectin.

Amylose makes up about 20% of the starch. It is a polysaccharide consisting of glucose molecules with α-1,4-glycosidic bonds.

The macromolecule, however, is not built linearly, but in a spiral shape.

Amylopectin makes up about 80% of the starch. It is a polysaccharide which, in addition to the α-1,4-glycosidic bonds between the glucose molecules, also forms α-1,6-glycosidic bonds, which means that the macromolecule is more branched. 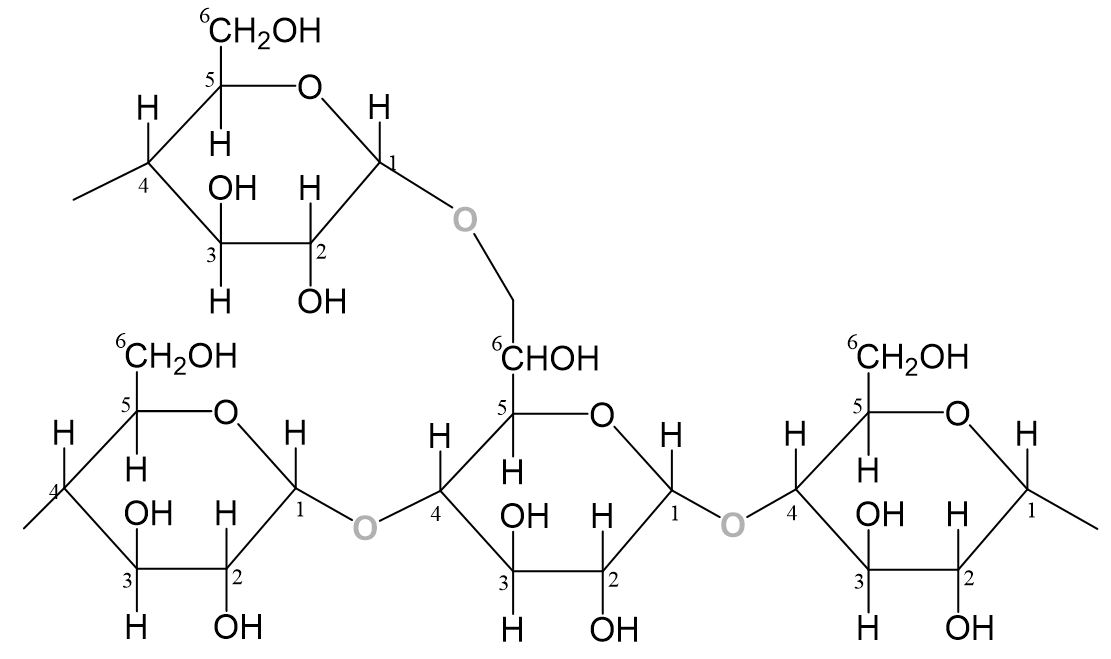 Another important polysaccharide is cellulose, a vegetable building material. It is a macromolecule made up of β-glucose molecules with β-1,4-glycosidic bonds. The cellulose macromolecule has a linear structure, which is why it has the typical fiber-like structure.