Real-time navigation systems put to the test: who can get past the traffic jam?

The route is the goal? Sure, when you're on the road trip over the winding paths between Norway's fjords or the endless expanse of American highways spreads out in front of you. On the other hand, things look completely different on the daily commute to work. Here, hardly anyone develops the heartfelt desire to take the time to examine every square centimeter of the commute individually - even if the rush hour traffic would often offer sufficient opportunity to do so. How good that in our networked world there are all kinds of ways to escape traffic jams. But which of the services actually works best?

The market for so-called traffic situation services, which provide car manufacturers and their navigation systems with real-time traffic data via the Internet, is determined by three big names: TomTom, Inrix and Here, the latter being taken over by Audi, Mercedes and BMW in 2015 and thus especially in the future will play a special role. There is also the veteran: the well-known TMC standard, in which data has only been sent in one direction via the radio since the 1990s. Even modern navigation systems often fall back on it when they have to do without an Internet connection. There are also various smartphone apps, especially those from the two Silicon Valley giants Apple and Google.

In order to clarify which service is the best, the six testers gathered for the first trip of the day at 7 a.m. in Tübingen to simulate the daily trip to the auto motor und sport headquarters in the heart of Stuttgart. Whereby it is clear from the first few meters that the differences can be huge. The convoy already separates at the first intersection. Fiat (TMC), Mercedes (TomTom) and Volvo (Inrix) as well as the Google Maps app, which we let navigate for the test in the Skoda, drive to the left, while the BMW (Here) and the Ford, which is in the test the iPhone app Maps is on the way, turn right to avoid the traffic jam on the B27 on the country road. 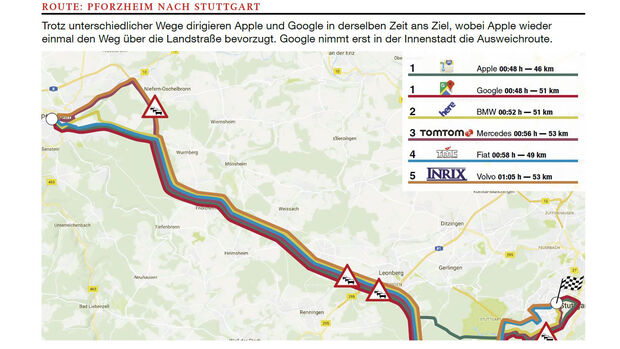 ams
The smartphones often get there faster than the built-in competition.

From now on, the BMW will be using sticks and sticks. With the result that he crosses the finish line on this stage just under 20 minutes after the first car. But the ConnectedDrive Navi, which costs 2,200 euros and gets its data from the former Nokia subsidiary Here, rarely made such mistakes. In most cases, the Bavarian drove in the front midfield. Over the 15 stages, he experienced a lead of 14 minutes over the average and even came to the finish line first. This was also achieved by the Swedish competition, which has relied on Inrix data since 2015. In terms of precision when predicting arrival times, however, the Volvo left a lot to be desired in our test. Because while everyone else made up for time over the more than 4,000 kilometers from time to time, the Sensus navigation system (1,170 euros) only had to correct the expected arrival backwards and came up with a total of 4.30 hours delay. In addition, the V90 Cross Country spent most of the time on the track with a total of 12.53 hours. At 12.50 hours, it was only slightly shorter, but much more precise, with a total delay of only 3.11 hours to the expected arrival times, the Mercedes reached its destination. However, the E-Class does not deliver a brilliant performance.

Compared to the average, the Mercedes was five minutes behind and thus even behind the Fiat 500X from our long-term test fleet. Without a smartphone connection, the Fiat relies on the outdated TMC standard and can therefore only work with the comparatively rough information that the radio stations broadcast. To our surprise, despite this supposed handicap, the little Italian was the first to reach the stage destination five times - but four times by far the last because he simply did not recognize some traffic jams and stubbornly drove into them. That was a real tough test for the testers, especially when the radio announcer sent an alternative route over the airwaves at the same time, but the TMC navigation system skilfully ignored the outside world and the traffic situation and cheerfully steered towards the impending end of traffic jams on the main traffic routes.

Apple navigation chose major traffic routes the least - with success. Overall, the map app guided the driver through the traffic jam routes in less than twelve hours and also found the shortest route overall. The danger here: If one of the small side streets is blocked and the system reacts too late, nothing works anymore - as we also found out during the test.

On the other hand, the routing of Google Maps was much more risk-averse and guided the driver less often from the big roads, but also seven times to be the first to their destination, which clearly means the test victory. Especially since the free app (only data volume is chargeable) with a total of 19 minutes also had the biggest lead on the stage average. The IT giants beat the car elite. Will a new era be heralded in this way? You can see the exact results from our test in our picture gallery.

That's how we tested

First of all: Despite over 75 hours of driving time and more than 4,000 kilometers, our test remains a random sample. The conditions and traffic conditions are too different. In order to achieve a result that was as comparable as possible, auto motor und sport went looking for traffic jams with six vehicles over four days. To do this, the team drove from the same starting point to the same destination at the same time, strictly following the information provided by the navigation devices, which were all equipped with traffic jam services. While the permanently integrated systems were used at BMW, Mercedes, Fiat and Volvo, the smartphone navigations from Google and Apple were used in the Skoda and Ford. Equipped with camera and GPS monitoring, the drivers set off and regularly changed vehicles to ensure equal opportunities. For this reason, there was also a strict speed limit of 130 km / h on the motorway. In addition, the driving impressions of the testers were recorded in a logbook. 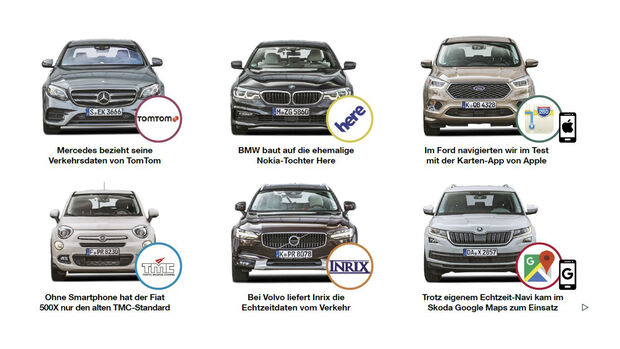 ams
We literally put six cars with six different systems in the race.

Permanently installed navigation systems usually offer the most convenient solution, rarely the cheapest. While apps and portable devices can be used to freely choose the traffic jam services, with the permanently integrated navigation system, the manufacturer is left to decide. Although he sometimes changes his mind: Until recently, BMW and the VW Group (today TomTom) still relied on Inrix data and switched providers without consulting their customers. Since the takeover of Here, the dynamism of the industry has increased again, and many manufacturers want to cooperate with Here in the future. The flexible retrofitting option, on the other hand, often has to be bought at a high price. 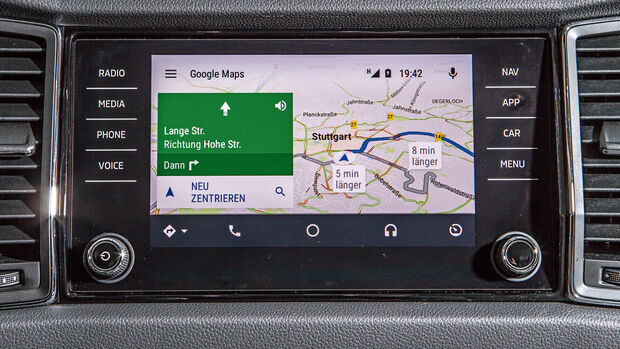 Dino Eisele
The two navigation services Google Maps and Apple Maps do not simply migrate to the dashboard as a mirrored version of the display, but offer a simplified interface.

Anyone who has had enough of wobbly mobile phone holders and too small smartphone displays in the car has been able to play content directly into the infotainment display via Apple's Carplay and Google's Android Auto app for a number of years. In particular, the two navigation services Google Maps and Apple Maps do not simply migrate into the dashboard as a mirrored version of the display, but offer a simplified interface that also makes operation during the journey child's play - including voice control via Siri or Google, which was shown in our test in the variants turned out to be the first choice when entering a destination. Also positive: you always have the latest navigation on board. In addition, more and more manufacturers are offering the mobile phone interface. The problem, however, is that Carplay and Android Auto are usually only available for the most modern infotainment generations that have the required seven-inch display ready. Most manufacturers usually only offer this with the large and, above all, expensive infotainment package, which already includes the manufacturer's navigation and thus makes the smartphone obsolete again.

Smartphones beat cars - a result that is otherwise only seen in popularity surveys among young people. In the case of traffic jam navigation, however, the IT giants Apple and Google skillfully play to their strengths, use their immensely large databases and thus get you to your destination the fastest. However, they have not left the car manufacturers completely behind. After all, the BMW remained in the slipstream and was able to hold up the manufacturer's flag with a good result. However, whether this is worth more than 2,000 euros for a lavishly equipped infotainment system remains questionable. Especially since the TMC service, long believed dead, performed even better than the real-time navigation with internet connection from Mercedes and Volvo.