Green tea has been associated with the people of Japan for so long that it is now known as "Japanese Tea". However, green tea is much more than just a drink. It is a phenomenon that is closely linked to everyday life in Japan. 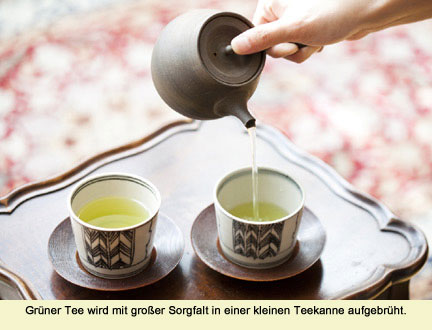 Sencha - the quintessence of green tea

Green tea is made in a very special way in Japan, namely by steaming the tea leaves to stop fermentation. Depending on how the tea leaves were cultivated, where they are located on the plant and also depending on the duration of steaming as well as how they are dried and processed, green tea leaves are in sencha, matcha, gyokuro, kukicha and many other types of tea.

Sencha is made by picking only the youngest tea leaves and then steaming them, shrinking as they dry. This process was developed at the beginning of the 18th century, and has been ever since sencha the most widely consumed green tea in Japan. Indeed it has sencha still has the largest proportion of green tea drunk in Japan today.

Green tea is the ideal drink in the morning after waking up, during a tea break in the afternoon or as a sign of hospitality when visiting guests. Most people in Japan take the time several times a day to fill a small teapot with tea leaves, pour hot water into it, and let the tea steep for a little while. Green tea is even taken outside in thermos flasks, for example for picnics or as a drink during breaks at work.

In restaurants, as soon as guests sit down, green tea is served free of charge and refilled as often as you want. In fact, tea is an important part of any meal. Green tea combines a slightly bitter and harsh taste with a hint of sweetness, making it a perfect addition to all kinds of dishes. Green tea is also an ideal way to cleanse your mouth after a meal with fatty or raw foods such as sushi.

Nowadays, green tea is also being offered as a ready-to-drink drink in bottles more and more often because it is practical and convenient. Vending machines and small shops (convenience stores) offer a wide variety of green tea in the most varied of flavors and aromas, so that a selection is almost difficult. As a rule, tea in Japan is drunk without sugar. Many Japanese drink green tea the way people drink water in other countries. Recently, however, more and more people have been drinking green tea because it is healthy.

Believe in the healing power of tea

Tea originally came to Japan from China at the beginning of the 9th century. At that time it was considered an elixir to achieve eternal youth and long life. For a long time, it was also valued more for its properties as a medicine and less for its pleasant taste. People in Japan drank tea when they were not feeling well. They also used salted tea to gargle when they caught a cold. As the saying “morning tea brings happiness” expresses, it was believed in Japan that a cup of tea in the morning drove away mischief. At times, tea was held in high esteem and experienced almost something of a kind of admiration.

Green tea contains five times as much vitamin C as lemons. Therefore it stimulates the blood vessels as well as the circulation and kills germs. Vitamin C is the main reason that green tea has long been considered the ideal remedy for colds in Japan.

Another important ingredient, catechin, is responsible for the bitter and slightly furry taste of green tea. The best way to extract it is to infuse the tea leaves with hot water at 90 ° for a short time. Catechin is considered a powerful antioxidant. It slows down the aging process of cells and prevents high blood pressure and diabetes. Catechin is also found in many other foods as an ingredient and supplement. It is also used in numerous products because of its antibacterial properties or its ability to bind odors. These include, for example, towels, underwear or chewing gum against bad breath.

Green tea extracts are also a popular fragrance in aromatherapy today. For example, they are used in products such as scented water. Their fresh, pure and sweet fragrance is completely different from the previously known fragrances and they spread an exquisite and typically Japanese aroma.

Thanks to its special property of keeping people healthy and protecting cells from aging, green tea has now developed into a reliable therapeutic element in everyday life in Japan. Green tea is therefore an important key for a healthy lifestyle and for the longevity of the people in Japan.