How was your relationship with Bengaluru

November 3, 6 p.m. After a few days in Bangalore, it's for them bangaloREsidents Time to tell the people of Bangalore about their expectations and the input they are hoping for from the locals. Spot on bangaloREsidents- a presentation evening for the residents also gave them the opportunity to get to know Bangalore's artist community. The guests at the event included representatives of the host organizations as well as local artists from the fields of theater, dance, film, urban design and music.

The evening led by Joshua Muyiwa, one of the city's most popular emcees and poets, was very entertaining - although one presentation followed the next. In his typical impromptu manner, Joshua entertained everyone with (not always entirely correct) facts about the Germany-Bangalore relationship. And with anecdotes that he himself had experienced with Germans in India. About the responsible landscape planner of Lal Bagh, Gustav Krumbiegel, he said something like: "I thought he was just another Tamil uncle."

Each resident had seven minutes to present their work and plans for Bangalore. An intern in the front row should actually be strict about the time limit, but many of the residents did not adhere to the seven-minute rule. Fortunately, Joshua knew how to perform publicly those who exceeded their time!

Here's what we learned about the residents' plans during the bangaloREsidency:

Oliver Walker, bangaloREsident @ 1 Shanthi Road, presented his previous work. They all build a bridge between visual installation art and social, historical and economic data. In Bangalore, he would like to extend this practice to an investigation of plastic bags - and for once see them not only as environmentally harmful objects, but as objects that anyone can easily own and that can acquire an inexplicably sentimental value. Many of us have that one special plastic bag, Walker's observation. That you would never throw away. Oliver is primarily interested in the contradiction between the everyday nature of the bags, the feelings they can arouse, and the pollution they cause. 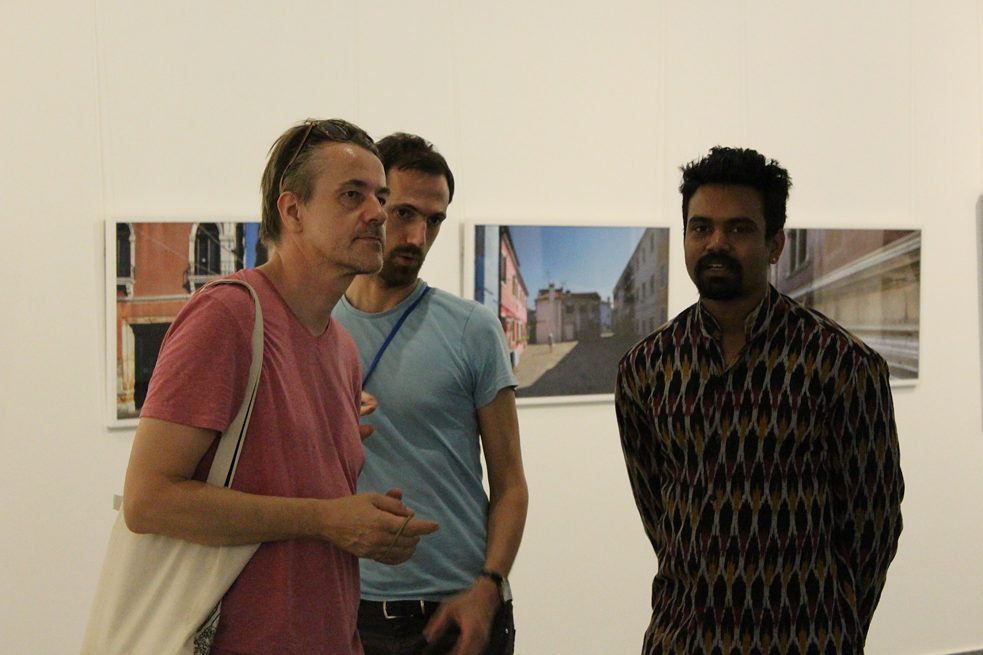 Ingo Gerken (left) & Oliver Walker (center) | Photo: Maximilian Hollerith © Goethe-Institut / Max Mueller Bhavan Ingo Gerken is bangaloREsident @ 1 Shanthi Road. As a concept artist, Ingo often creates works that are minimalist in their visual form, but provide a pointed comment on the history of their form. He carries out simple tasks - for example, cutting a hedge or throwing a stone into a gallery - and in doing so uses seemingly everyday materials to increase or recreate the meaning of the exhibited object as well as the place where it is located. Ingo plans during his bangaloREsidency other such - political, poetic and humorous - interplay with space to allow sculptural interventions to arise that reimagine the normality of existing places in Bangalore.

Benjamin Brix, bangaloREsident @ Sandbox Collective, is not for the first time in Bangalore. This year he was already working on a joint theater production by German and Indian artists entitled Ramanaya. During his last stay, Ben discovered the flower market at K R Market. Every morning flowers are delivered to the market from the villages and towns around Bangalore. Huge heaps of buds and garlands fill the market - it's a very special, colorful picture. While his Residency Ben would like to follow the journey of the flowers with his camera - starting at the place they come from to the point at which they disappear again.

Lina Gómez, bangaloREsident @ Attakkalari, was on one of her many trips - this time in Brazil - when she was seized by the virtuosity of the bodies of folk dancers. She perceived their amalgamation of sound, movement and feeling as something particularly expressive. At the same time, however, as something that was strongly determined by these specific bodies and the context from which they come. When she then worked on similar movement practices with dancers in Berlin, they reacted to the choreography in a completely different way. With this experience in mind, Lina wants to explore the complexities of the meeting of different dancing bodies. With students from Attakkalari, she will investigate how history and contexts are to be understood as a source of movement. 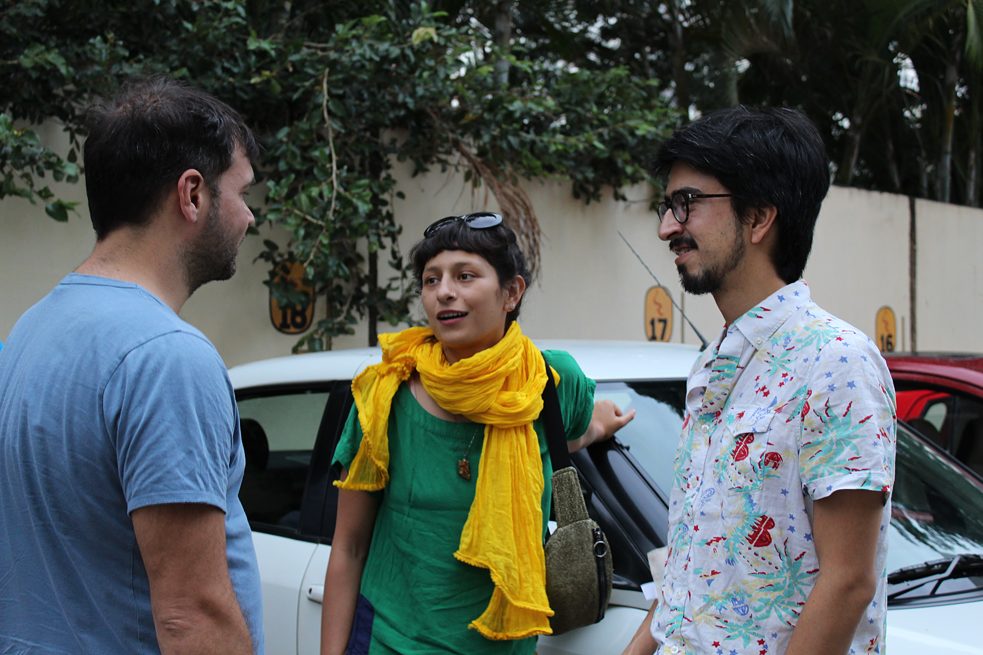 Benjamin Brix (left), Lina Gómez (center) & Carlos Andrés Rico (right) | Photo: Marie Knop © Goethe-Institut / Max Mueller Bhavan The composer Carlos Andrés Rico, bangaloREsident @ Maraa, creates radio interventions in public places to transform the spirit of the real spaces into something closer to magical realism. He uses sounds as his primary medium to transform the spaces in such a way that our relationship with them changes and we see them anew. In Bangalore, Carlos plans to work with local artists. He wants to develop a series of radio interventions using sound material from different locations across the city. In this way, he hopes to reshape the traditional views of certain places, their perception and their understanding.

Your architecture background leaves Laura Fiorio, bangaloREsident @ MOD Institute, keep coming back to buildings and urban landscapes in their photographic work. She creates image archives of places and comments on topics such as development and gentrification. For Laura, the archive is both an existing document and a growing source and as such can be used for social considerations, especially in an urban context. At the MOD Institute, Laura would like to work with residents of Bangalore and create a relationship between contemporary photography and traditional archives. The aim is to create a new collection site where Bangalore's residents can share their concerns about their city. 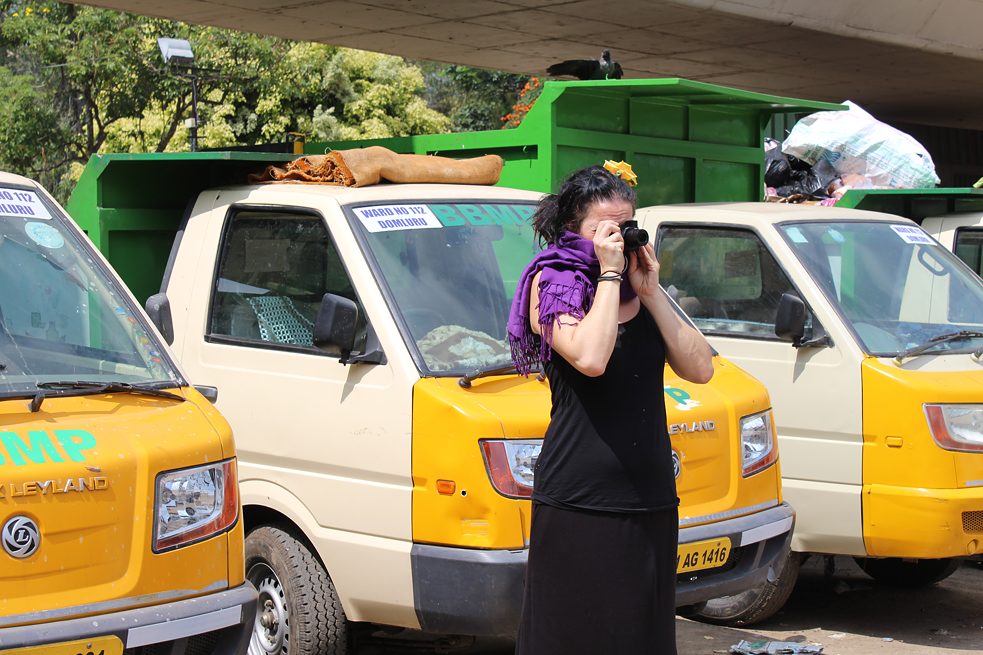 Laura Fiorio | Photo: Maximilian Hollerith © Goethe-Institut / Max Mueller BhavanWalter Solon, bangaloREsident @ Jaaga, wants to make a short film in Bangalore (as a pilot for a reality TV series). The basis should be the life of a character from a previous work. In previous work, this figure demonstrated survival strategies in apocalyptic situations. After working for the Israeli secret service, she discovered India while on vacation and now works for an IT company in Bangalore. Walter would like to use the confluence of people who come together in Jaaga for his project. 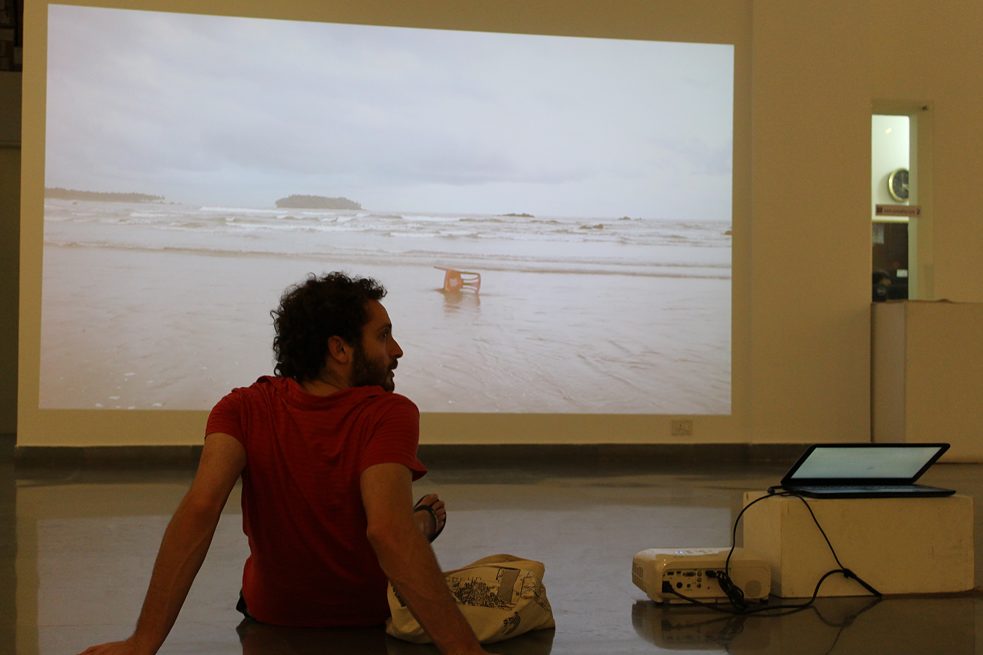 Walter Solon | Photo: Maximilian Hollerith © Goethe-Institut / Max Mueller BhavanVerena Regensburger, bangaloREsident @ Abhinaya Taranga, is planning a play with students from Abhinaya Taranga. In previous work she dealt with the topics of language and communication (especially with deaf-mute actors). Now Verena would like to devote herself to communication in other cultural contexts as well as between languages ​​and bodies. 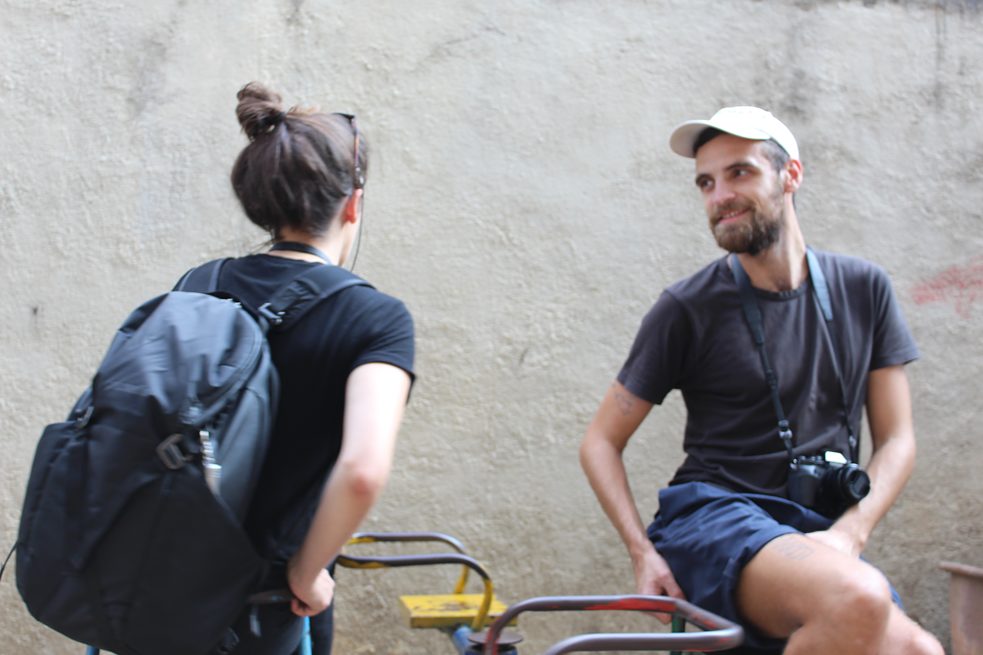 Verena Regensburger (left) and Marius Land (right) | Photo: Maximilian Hollerith © Goethe-Institut / Max Mueller Bhavan Objects are for Marius Land, bangaloREsident @ Daily Dump, no definite things. Rather, they are complex entities, the meaning and purpose of which change depending on when and how you come across them. For example, a broken mug can be an item to throw away at home - but it can become a sculpture in an art gallery. Marius calls this the latency inherent in objects. That possibility of using and understanding them in a variety of ways. The Indian idea of ​​the jugaad - the practice of finding some kind of solution for what you have to achieve or for what you need - it is precisely this latency that uses this latency. While his Residency Marius would like to deal with what is behind jugaad and unpack an “innovative approach to pragmatism” with the help of objects. 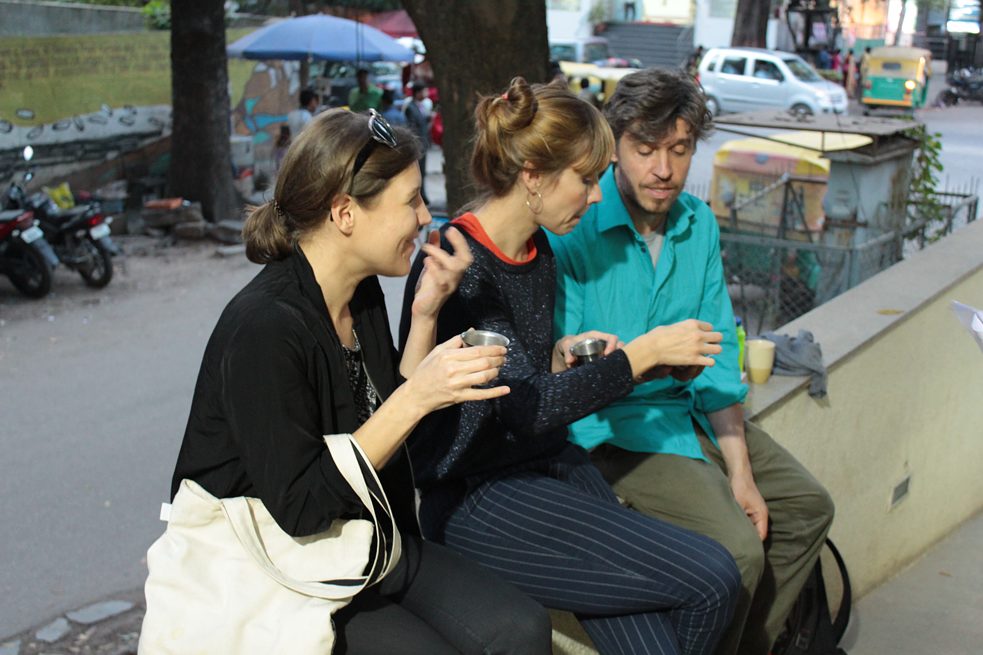 Annika Hippler (left), Nika Pfeifer (middle) and Lukas Matthaei (right) | Photo: Kerstin Meenen © Goethe-Institut / Max Mueller Bhavanmatthaei & pfeifer, bangaloREsidents @ Srishti, will teach students at the Srishti College of Art, Design & Technology as part of the institution's interim program. Together with the students, they would like to develop a series of performative interventions at different locations that are based on the idea of ​​the 'magic trick'. Fascinated by the absurdity, the ingenuity and the wonderfulness of magic tricks, matthaei & pfeifer want to discover which “urban magic” or which magical tale are typical for Bangalore. It's about getting beyond the silly thing about a traditional magic trick and questioning what is specific to a place. (During their residency they also hope to unravel the secret of the Indian rope trick that overrides gravity.)