How is technology changing the food industry

Digitization in the food industry: opportunity or challenge?

Digitization has brought some improvements to food and beverage companies, but when will the big changes come? Which technologies bring the greatest benefits, what are the challenges? And what will the food system look like in 20 years? In its digitization study, CSB examined these questions - and received answers from 121 decision-makers from 29 countries. These are the main findings of the study.

The food industry is doing well, but there are also plenty of challenges

According to the CSB study, the economic times for food producers are still very good. Despite the high price pressure, the vast majority of those surveyed rate the current situation positively and expect the good development to even improve in the coming years. However, this optimism is accompanied by three major challenges:

Digitization is the key to improvement

For many CEOs, IT is the key to improving the food industry. The importance of IT has increased significantly compared to 2017: 17 percent of those surveyed rate information technology as very important. However, the decision-makers are not particularly keen to invest when you compare the figures with other industries. Only around 15 percent spend more than 1.5 percent of sales on IT. At almost 70 percent, the majority of those surveyed invested no more than 1 percent of sales in digitization. For comparison: According to the Forrester analysts, medium-sized US companies spend 4.3 percent of their sales on IT. 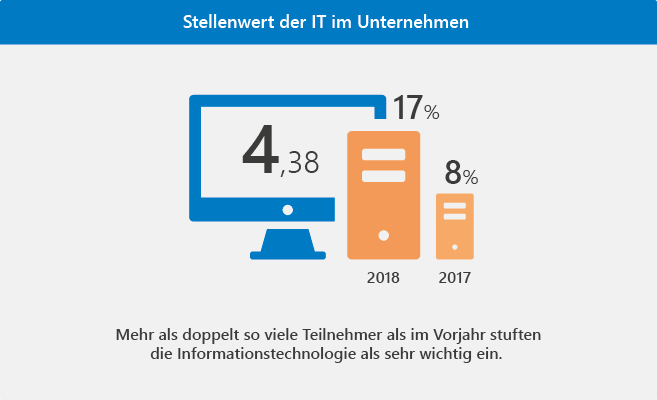 The food system will change massively as a result of digitization

The comparatively low investment volume is surprising. At the same time, 86 percent of those surveyed assume that the new digital technologies and the associated possibilities will massively change the food system. More than a third of the survey participants expect that producers will be the winners of digitization: The digital transformation will make networked production the standard, which will bring producers and consumers much closer together. Producers can produce ever more individual foods at reasonable costs, direct orders from the manufacturer are now the rule. Another interesting aspect is the evaluation of the platform economy. Around 27 percent of those surveyed see a radical change in market structures due to big players such as Amazon and Alibaba, but also food-specific platforms.

Most of the companies surveyed have not yet drawn up a specific digitization roadmap. Based on the statements of the respondents, however, it can at least be seen that ERP systems will remain the linchpin of many processes in food companies in the future. Firstly, they are essential for querying and forwarding master and transaction data as well as for processing a lot of other information. And secondly, most of the software applications used in a company, but also new technologies, web shops and apps, are connected to the ERP. As the central nervous system, it offers the possibility of increasing transparency, promoting the networking of the supply chain and improving the responsiveness of the companies. However, the demands on the systems are high. For example, companies want greater user friendliness, better documentation capabilities and more analysis options.

The study also assessed four technologies with regard to their potential for the food industry. Here, collaborative robots and artificial intelligence (AI) are at the forefront. Companies expect significantly less from 3D printing and blockchain. Does that mean the blockchain hype is over? Here we have to wait, because the technology offers a great opportunity to really improve transparency in the value chain. Large retail companies such as Walmart and Carrefour have already started using the blockchain - and will probably also require manufacturers to integrate the technology.