How isentropic process can be irreversible

The free expansion of a gas against a vacuum in an adiabatic system, explained in the previous section, showed that this process cannot be described with the equations shown in the section on the isentropic process. Rather, the temperature remains constant during this expansion process. The question therefore arises which condition an adiabatic system must be based on so that it can actually be described by the isentropic equations of state.

Interactive illustration: Free expansion of a gas against a vacuum

For this purpose, the previously presented thermodynamic processes are examined more closely. You will find that from an energetic point of view, these can run both in one direction and in principle in the other direction. In the chapter on labor turnover, the process in which a gas is made to expand in a cylinder with the addition of heat was considered. A toothed rack with a toothed wheel located on the piston can finally lift a weight and hold it in position with great effort. In principle, this process can be reversed. 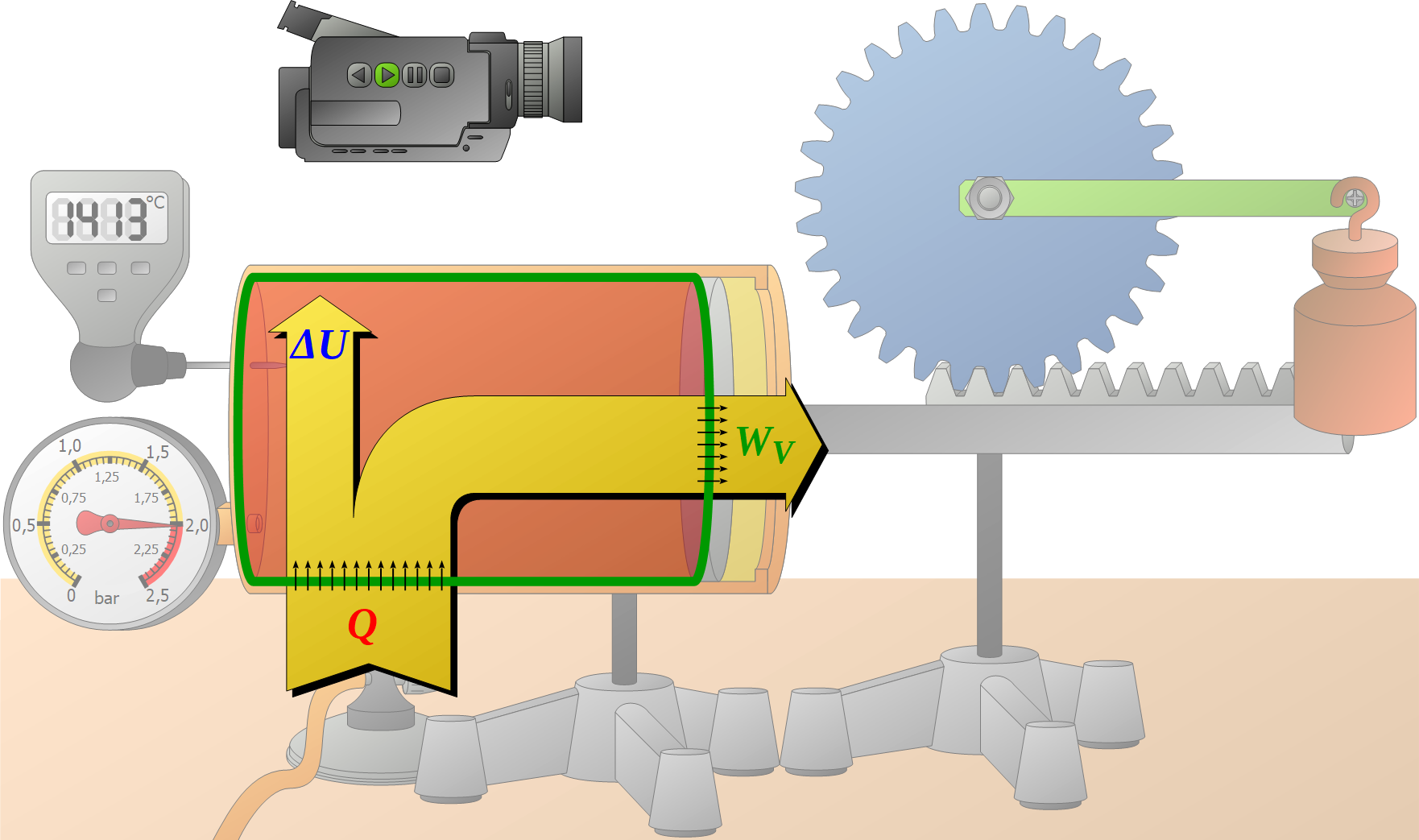 Interactive illustration: expansion of a gas

To do this, you can simply think of the original process as recorded with a video camera and then played backwards. In such a reverse case, the weight drops again with heat dissipation (cooling) [move the mouse over the figure above]. In this case, work is no longer done by the gas on the weight but, conversely, work is done on the gas by the weight - the gas is compressed by the weight, so to speak. At the same time, the cooling reduces the temperature and with it the internal energy. In such a reversal process, the energy flows are reversed without encountering a contradiction based on experience.

The examples presented in the chapter on special processes are also all fundamentally reversible from an energetic point of view. In an isochoric heating process, for example, there is an increase in internal energy due to the heat supplied. If this process is considered energetically the other way round, an isochoric cooling process would be obtained. In such a reversal case, the internal energy would decrease due to the heat dissipated [move the mouse over the figure below]. 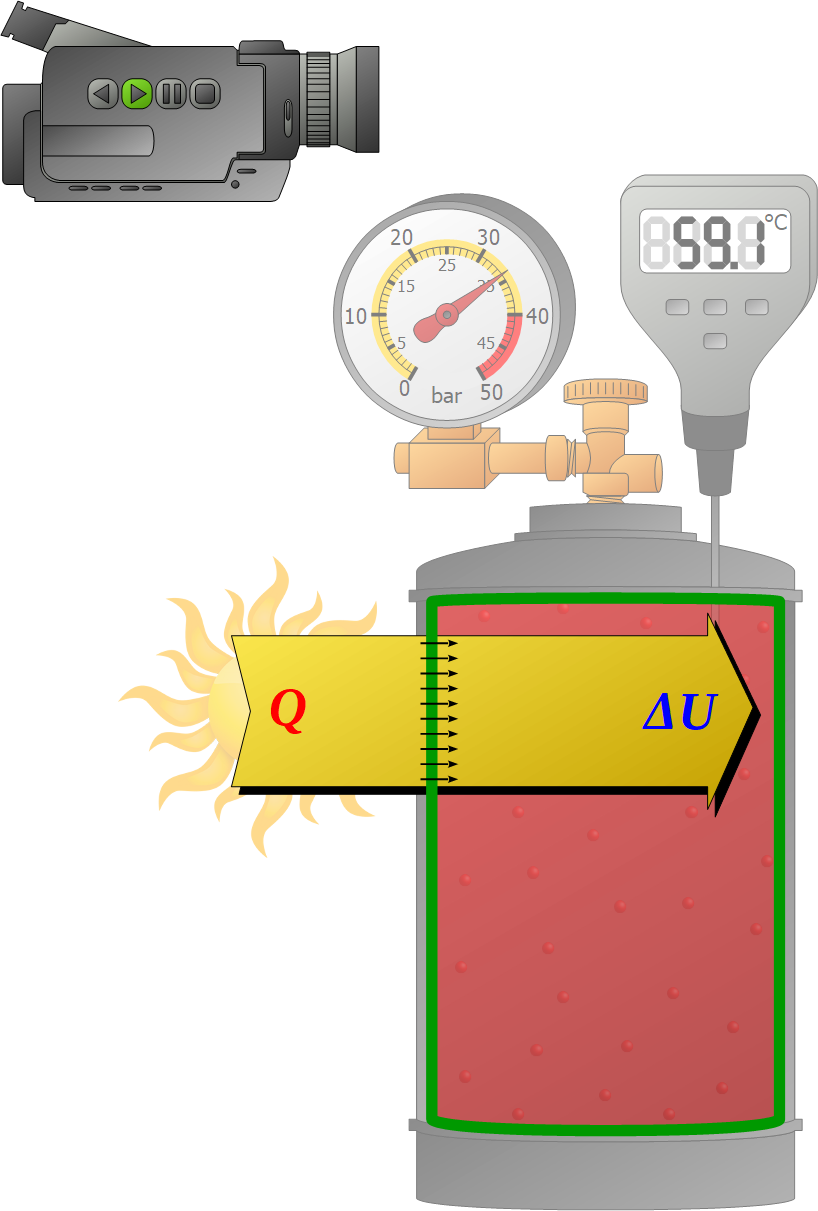 The isobaric heating process shown can also be energetically reversed. A gas initially does work with the application of heat, while the internal energy increases. In the opposite case, an isobaric cooling process would be obtained, in which the gas is compressed with the addition of work, while at the same time heat is removed. Overall, the internal energy is reduced (lowering of temperature). 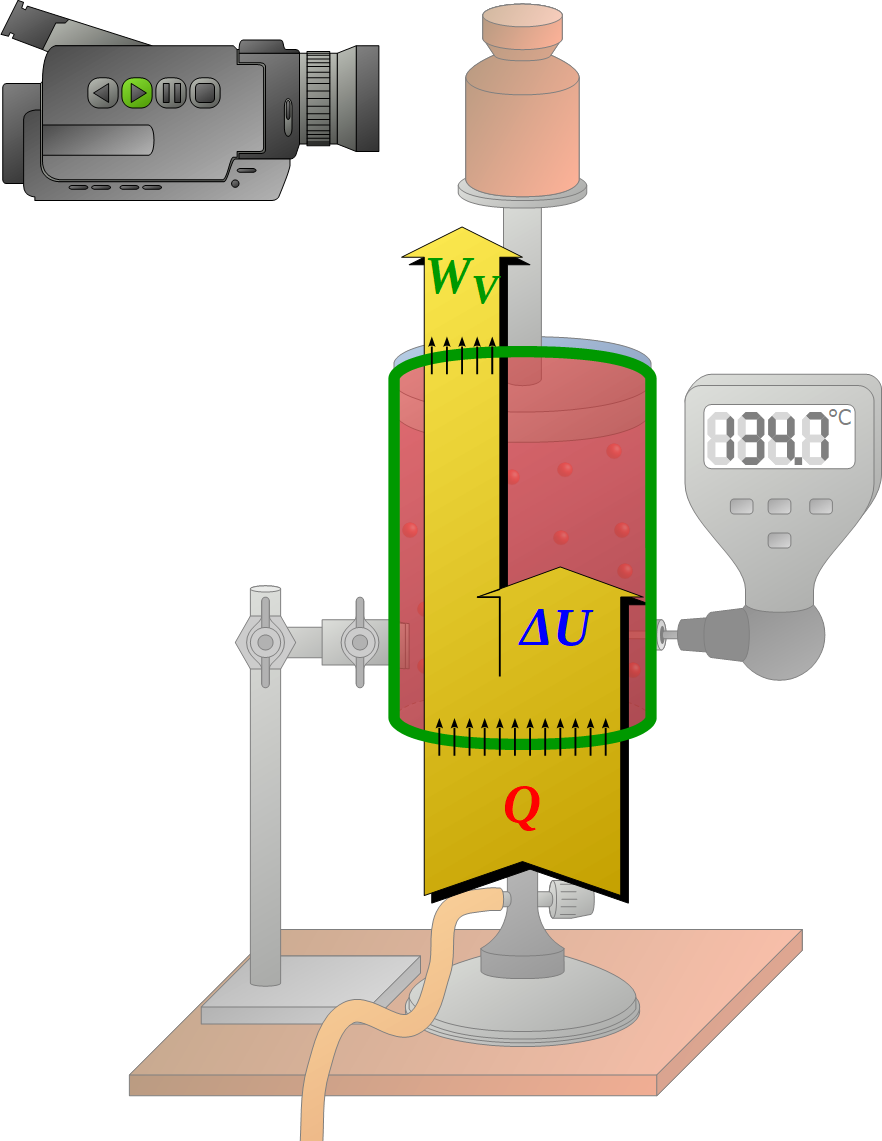 The presented isothermal process also has such an energetic reversibility. If the gas is compressed very slowly in an air pump with the valve closed, a (almost) constant temperature is obtained during the compression due to the simultaneous dissipation of heat to the environment. Conversely, the gas can also expand isothermally again from this compressed state. For this purpose, the change of state must take place very slowly again so that the environment can supply the expanding gas with sufficient heat to prevent a temperature decrease during the expansion. 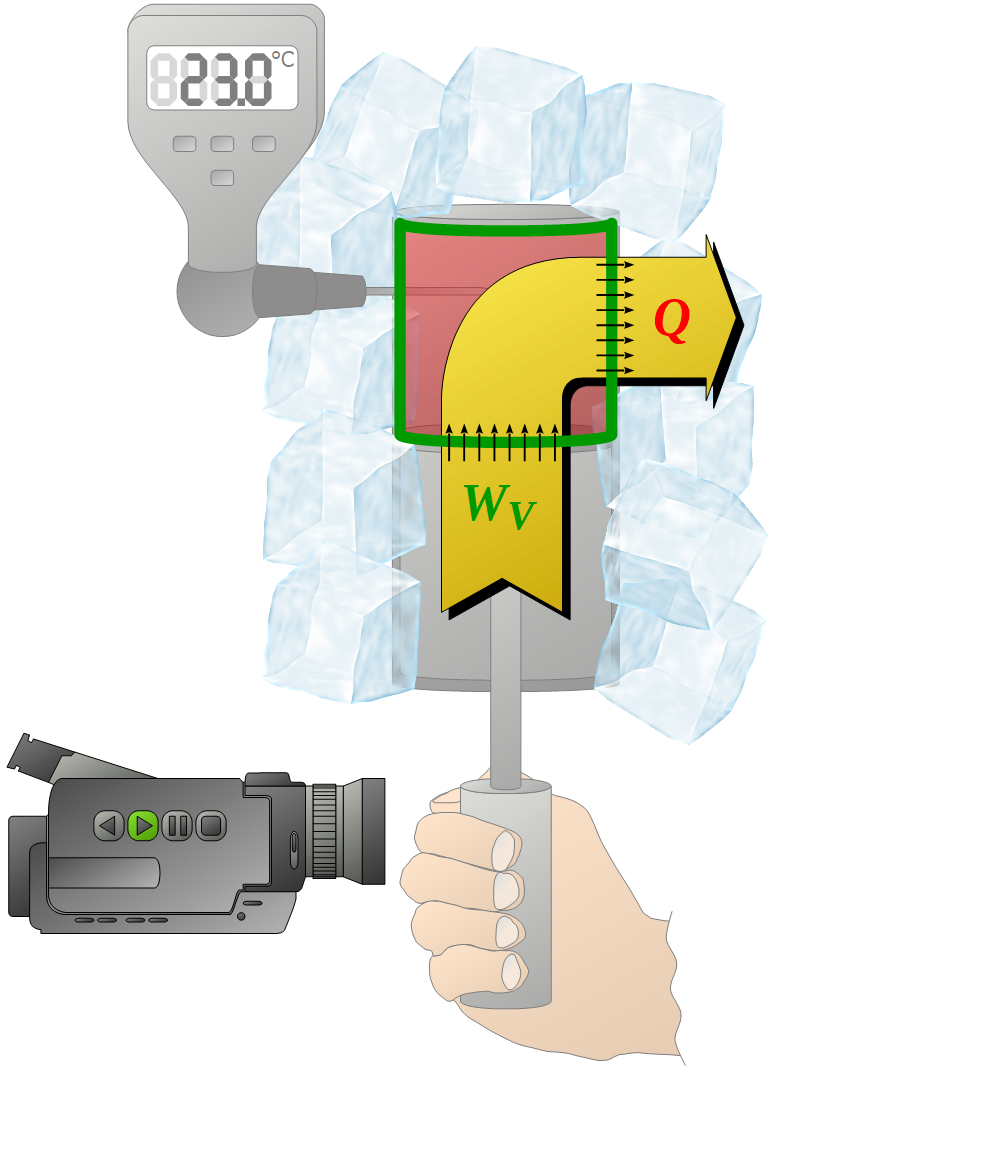 The isentropic process already presented can also be reversed. In this process, a gas is first rapidly compressed with the use of work, which leads to a corresponding increase in internal energy. In the opposite case, this would mean that the gas, starting from the compressed state, expands again very quickly. In this isentropic reversal process, work is then released to the outside at the expense of internal energy. 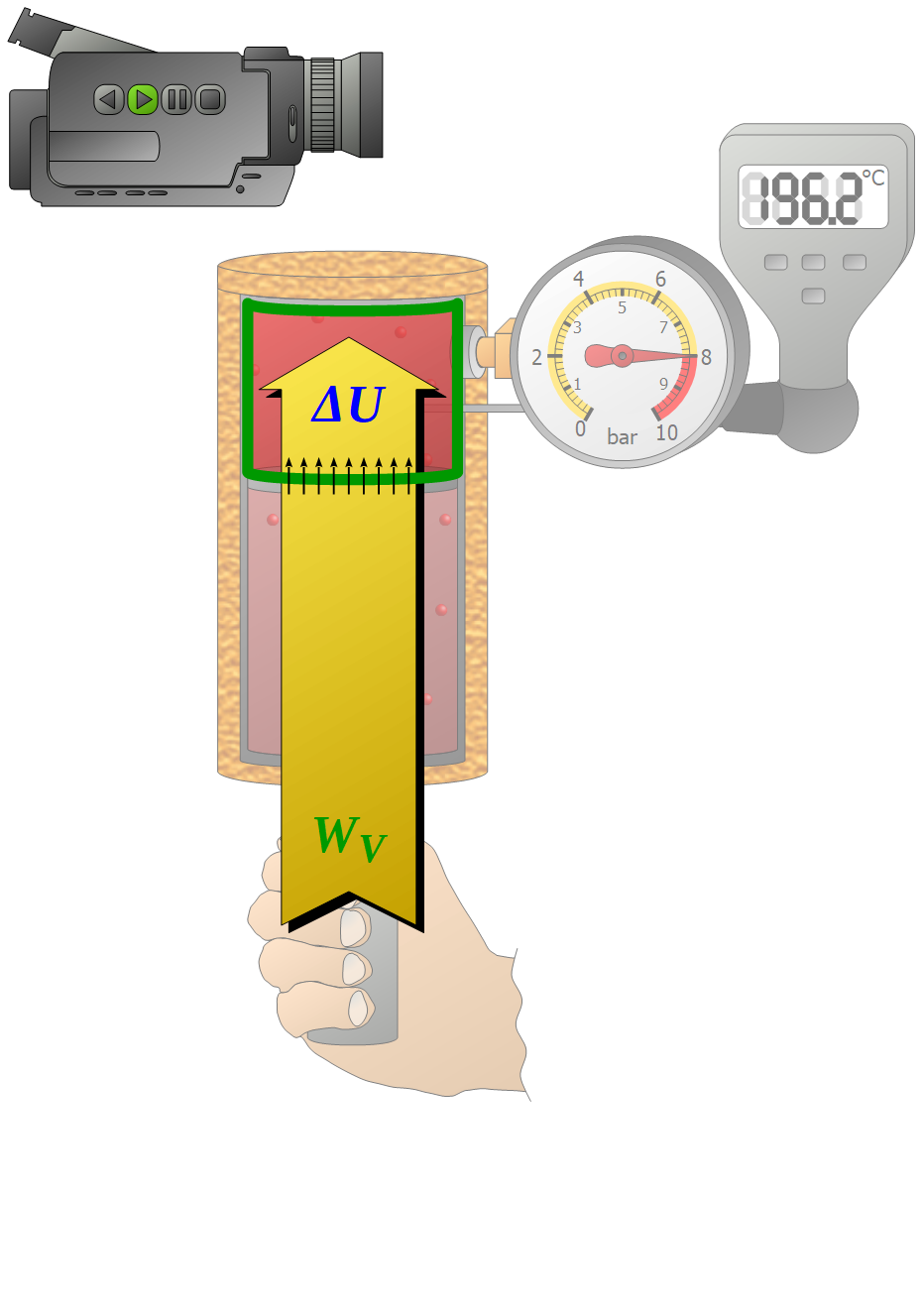 The reversibility of processes is described in thermodynamics by the term entropy. For the reversible change of state of the adiabatic system, the entropy remains constant, from which the term isentropic Process can be derived (Note: The term isotropic has already been assigned a different meaning, which is why in this case the prefix iso by eat is replaced!).