What are the best destinations in Trichy

Tiruchirappalli - called Trichy for short by the locals - is located in the center of the southern Indian state of Tamil Nadu.

The climate is pleasant and slightly humid all year round, but the best time to travel is roughly limited to the months of October to April. The sprawling metropolis has always been fiercely fought over by the various dynasties.

The main attraction and landmark of Tiruchirappalli is therefore the gigantic Rock Fort located in the old town, from which you can get a great overview of the city and the surrounding area. To the south of this is the newer district of Trichy, the Cantonment Areawhich was originally created by the British. All tourist facilities such as the train station, post office, restaurants and hotels are located here.

Rock Fort
At first glance you can see the strategic use and military importance of this facility, which was built on an 80 m high rock ledge. The 437-step ascent to the fortress is lined with shrines and cult caves that were created by the rulers over time. Here is the Lalitankura cave worth mentioning with their fantastic depictions of Shiva from the 7th century. Once at the top, a magnificent panoramic view compensates for all the hardships. From here you can even see the towers of the Sri-Ranganatha and Sri-Jambukeshwara temples north of the Cauvery River.

Lourdes Church
The Trichys Christian Congregation is domiciled on St. Joseph’s College campus. A visit is worthwhile due to the architecture, which was modeled on the neo-Gothic basilica in France.

A good and cheap way to get around Tiruchirappalli is by renting a bike. However, you should expect high temperatures and emissions in the city center, so avoid the area around Big Bazaar Road if possible!

Tamil Nadu is characterized by countless temple festivals and colorful processions, and Trichy is also celebrated annually. The most important events in the holiday calendar are Car Festival in January and that Vaikunta Ekadasi Festival in December, when thousands of pilgrims come to the city.

Excursions in the area

Sri Ranganatha Swami Temple
6 km north of Trichy, on an island between the Cauvery River and its tributary Kollidam, the famous pilgrimage town of Srirangam with one of the most impressive temple sites in southern India. Over time, the main temple became the largest Vishnu shrine in all of South India, with a total area of ​​960 x 825 meters, through additions made by the various dynasties. The 21, which are visible from afar, are particularly striking Gopurams (Gate towers).

Take enough time for the temple city to immerse yourself in the pulsating life of shops, musicians, bazaars, pilgrims, animals, traders and beggars. It can make sense to turn to one of the numerous guides for orientation and additional information. If possible, climb a temple roof to get an overview of the winding and spacious complex - you can also see the gilded roof of the main temple. Further attractions are e.g. the 1,000-pillar hall, the elephant stables or the temple kitchen. The three innermost courtyards with the sanctum are closed to non-Hindus!

Sri Jambukeshwara Temple
If the temple city in Srirangam did not overshadow everything else, the Sri-Jambukeshwara complex, 2 km further to the east, could be recognized as one of the most fascinating in the region. Although the floor plan is based very much on the great model, you should not miss the Shiva sanctuary! The sanctum remains closed to non-Hindus.

The 40 km distant place is not only home to the Shiva consecrated Brahadeeswarar temple, but is also known for its handicrafts such as bronze statues, silk, inlays and paintings.

For historians, anthropologists, archaeologists and art lovers, a trip to Pudukkottai, 48 km away, is worthwhile. There are countless prehistoric megaliths and stone circles as well as ancient palaces and water systems to visit. Also the famous cave temple Sri Brahadambal or the Bhuvaneswari Temple are here.

Have fun and lots of impressions on your trip to Trichy! 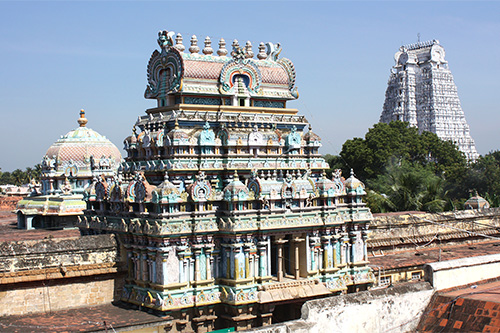 Cover picture - © Arian Zwegers (modified by UI) - CC BY 2.0
On the left you will find the reduced cover photo. Please click on it to enlarge it.

Be conscientious about yourself: The CO2 emissions of the flight can be compensated, for example with the Swiss organization myclimate. Reduce the consumption of water (e.g. with a shorter shower). Avoid unnecessary packaging waste. Advocate small traders instead of large entrepreneurs.

Happy with the content? We are happy about a link!
Suggestion:Tiruchirappalli for vacationer information