The superhero movie franchise has reached its peak

One thing that is almost as exciting as the movie itself is how successful it did at the box office. Many will now argue that they do not care about the grossing results of a film and that they rate the film itself - regardless of whether it hits or not. I fully share this argument. What is important to me is the film itself and how I felt about the film.

But why am I also interested in the box office results? Very easily. The more successful a film is, the more likely it will be a sequel on the one hand, and the more likely it will be that the producers will take a similar path for the next installment on the other. The best example of this is the movie "Batman v Superman". Personally, I thought the film was really good. I was particularly impressed by the narrative structure, the story and the atmosphere. I wasn't alone in my opinion, but the critical voices were clearly louder.

The Warner and DC Comics houses wanted a film on par with the Avengers. Batman v Superman grossed approximately $ 874 million worldwide. By comparison, Marvel’s The Avengers was $ 1.4 billion and Marvel’s Avengers: Age of Ultron was $ 1.4 billion. After a lot of back and forth, the second start (Man of Steel was released before that) of the DC Extended Universe was disappointed and changed the direction for the upcoming films. In my opinion, that has also led to the actual ideas being watered down. The result can be seen in the film Justice League, which "only" came to $ 655 million.

My wish - and nobody has to share it - would have been that Batman v Superman would have asserted themselves in such a way that Warner and DC Comics would have dared to build the DCEU as a “dark” counterpart to the Marvel Cinematic Universe. Whether this would have actually happened is of course speculation, but not absurd. For this reason, I have looked at all the film series and franchises in film history and identified the ten most successful. 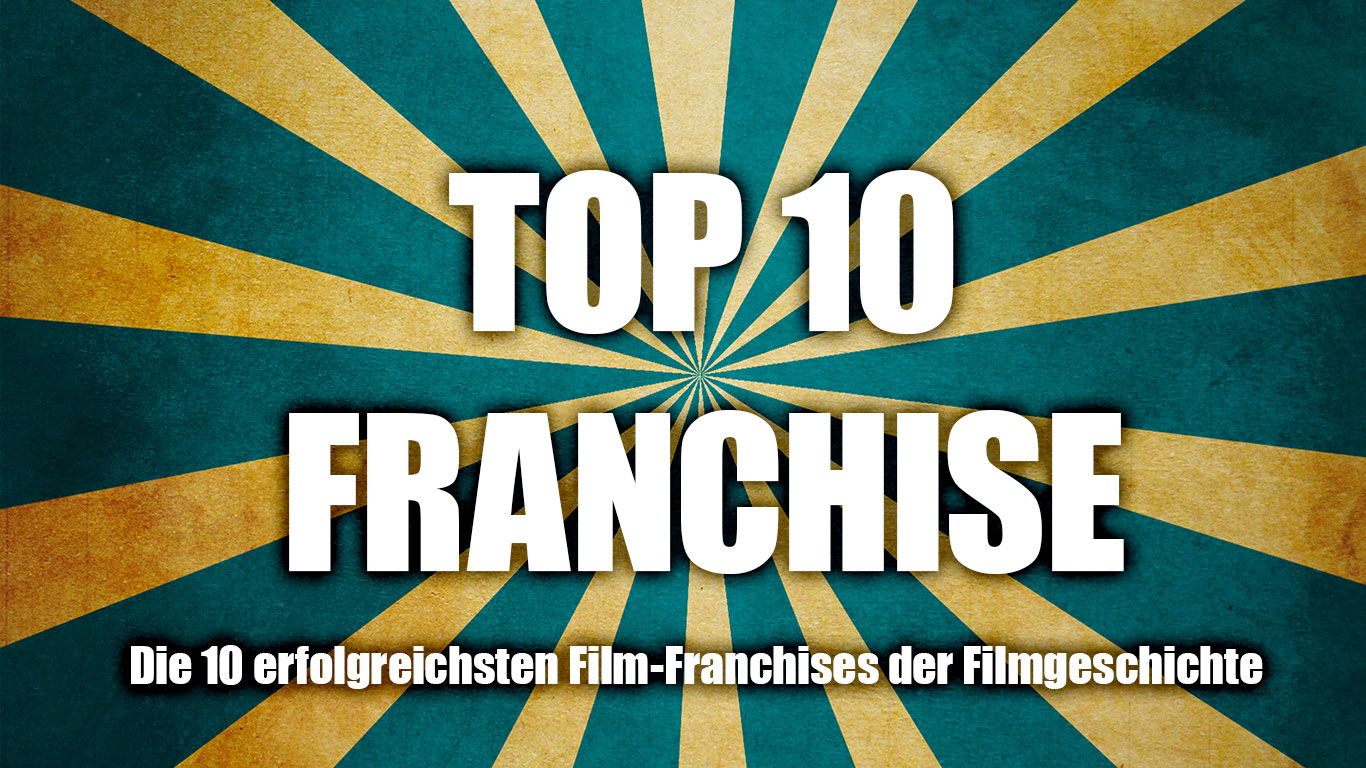 10th place goes to the Jurassic Park franchise. The first film in the series was released in 1993 and grossed just over $ 1 billion. An amazing result for the time. The two successors could not reach this mark by a long way. The reboot in 2015 was another big hit. Jurassic World made it $ 1.67 billion. In 2021, Jurassic World: Dominion will be the 6th film in the franchise.

The legendary Spider-Man swings in 9th place. In addition to the 3 Tobey Maguire films and the 2-part reboot, the films Venom and Spider-Man: Into The Spider-Verse also count in the Spider-Man universe. All of them come from Sony, all of which are $ 700 to 900 million each. With the exception of the animated film, which at least comes to $ 375 million and should therefore have more than met expectations. The rights to Spider-Man are now fully owned by Marvel again, so I've also excluded the two latest Spider-Man offshoots. Venom 2 (2020) and Morbius (2021) await us in Sony's Marvel Universe. All films from Sony’s Marvel Universe at a glance.

8th place | Peter Jackson’s Lord of the Rings & The Hobbit

With the Lord of the Rings and the Hobbit Trilogy, Peter Jackson brought two fantastic fantasy epics to the screen. The revenue per film was around $ 1 billion. Unlike most of the other film series, this one is finished.

7th place | The Fast and the Furious

When asked about The Fast and the Furious, I don't think you meet many people who openly admit that they like the series and like to watch the films. In the meantime 9 films have already been released and the series has become more and more successful from one film to the next. The franchise climaxed with The Fate of the Furious (2017), which grossed $ 1.2 billion. The last part only made half of it. But of course no sign of stopping for the makers. The 10th part F9: The Fast Saga will start in cinemas in 2021. If you are wondering about the "F9" - the last part ran as "Fast and Furious presents".

The Marvel Mutants finish in 6th place. In addition to the classic X-Men films, Wolverine and Deadpool are also characters to which FOX still has the rights. And in this case you can be happy about it, because under Marvel or Disney we would probably never have seen these characters the way FOX delivered them to us. The next film in the universe is another reboot of the series with the New Mutants (2020). Another Deadpool film is also mandatory. You can find all X-Men in chronological order here.

5th place goes to the still young DC Extended Universe, which is based on Marvel's Cinematic Universe. The first film is the Superman adaptation Man of Steel from 2013, which fell slightly short of expectations. Three years followed with Batman v Superman, the second film and the unofficial reboot of the series. The most successful DCEU film to date is Aquaman, which grossed $ 1.1 billion. closely followed by the film Joker, which I would attribute to the DCEU, even if it does not really refer to the content. The next trick will be the second Wonder Man film, Wonder Woman 1984. All DCEU films can be found here.

The largest film series in film history lands in fourth place. A total of 25 films with the smart agent have already appeared. In 1963, Dr. No the first James Bond film. The most successful film to date is the penultimate spin-off Skyfall from 2012, which grossed $ 1.1 billion. In 2020, No Time To Die will be the 26th James Bond film.

The second largest franchise in the film industry is Star Wars. A total of 12 films have been released so far. Who counts now: In addition to the 3 Star Wars films, the Star Wars stories and the animated film Star Wars: The Clone Wars are also included. By far the most successful film comes from 2015. "Star Wars Episode 7: The Force Awakens" - for me the weakest film in the series - grossed no less than 2 billion dollars. The next part of the science fiction epic awaits us in 2022. We also have an overview of all Star Wars films.

Marvel's Cinematic Universe is by far and more successful than the Star Wars and Harry Potter films combined. In 2008, Iron Man laid the foundation for a superlative cinema universe. A total of 23 films have been released so far. In terms of sales, the four Avengers films are the mainstay of the MCU. The four films grossed $ 7.7 billion together - more than the 25 James Bond films combined. You can write your own post about the recipe for success, but in short, Marvel has managed to inspire tens of millions of people with the continuity of the story, visually stunning action, popular actors and of course strong brands.

The most successful Marvel film of all time is Marvel’s Avengers: Endgame, which grossed $ 2.7 billion at the box office. Besides the Avengers films, Black Panther is the most successful film with $ 1.3 billion. There is currently no end in sight. With Black Widow the 4th phase in the MCU will be heralded this year and we can certainly look forward to many more Marvel. 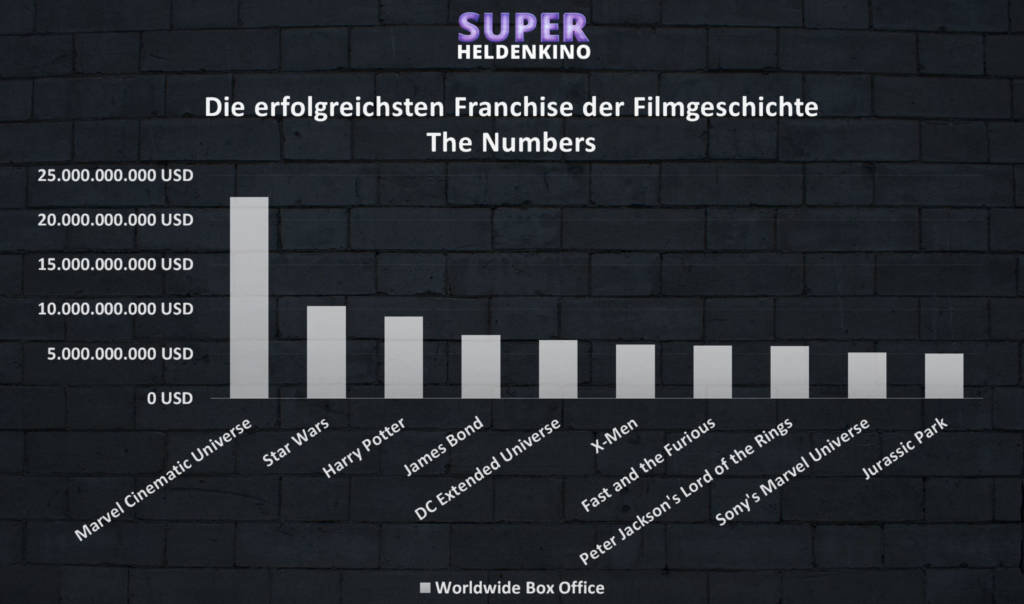 Big names and big numbers. In addition to the films themselves, many other factors play a role and box office sales are just one aspect. Each of these brands comes with revenue from licenses, merchandise, or other publications such as books or video games. The success ensures that these ranks continue and fans can look forward to more supplies. With one or the other franchise, the question might be whether the time is not ripe for a deal and whether the brand needs to be cannibalized further, but in the end it is a question of taste.