Feel free to take part in meet and greets

[Update: The winners have just been notified by email. Hopefully all three will now check their e-mail inbox very quickly and reply so that the rest can be organized. Congratulations on this way.]

You read that correctly: With us you can win a Meet & Greet with the Toten Hosen. More precisely: We are giving away 3 x 2 tickets including Meet & Greet for concerts on the upcoming tour “Laune der Natour” (dates below). 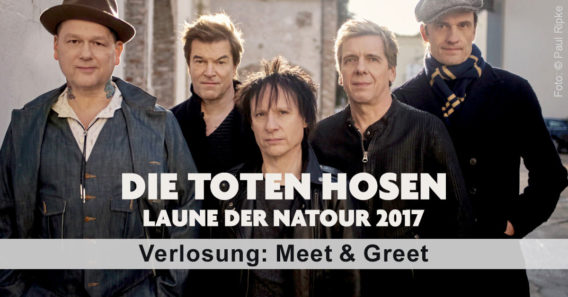 The album "Mood of nature" Der Toten Hosen has hit us as it was to be expected. And the sale of tickets for the shows shows that it was more than well received by the fans. We are all the more pleased that we can make a total of six people happy by not only Tickets for the show of your choice from the Germany dates below, but also in the run-up to the concert meet the Toten Hosen in person become.

If you want to take part in the raffle for the 3 x 2 tickets including Meet & Greet, just write us in the comments why he or she has to get to know the pants personally. We will then determine the winners from all the comments submitted.

The campaign runs until October 29, 2017, midnight. On 10/30 the winners will be determined and notified by email. We then need the names, email addresses and telephone numbers of the winners and of course the place and date of the concert. We pass this data on to the Toten Hosen label so that they can contact you. The data will only be used for this purpose. The Meet & Greet takes place before the concerts.

Otherwise, of course, the conditions of participation for competitions apply. We wish good luck to all participants.

The dates of the tour

768 responses to “Raffle: Meet & Greet with the Toten Hosen [Finished]”